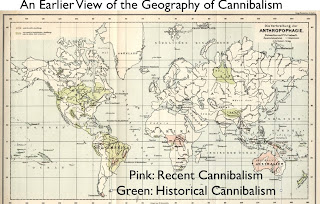 As mentioned the other day, Melanesia has long had a negative reputation in the Western cultural imagination, quite in contrast to its neighboring Pacific region of Polynesia. In the 1800s and early 1900s, disparagement of Melanesia typically focused on cultural practices deemed savage, especially cannibalism. Cannibalism was noted in some parts of Polynesia, particularly Samoa, but not to the same extant as in many parts of Melanesia.

In the 1960s and 1970s, anthropologists began reappraising received perceptions of savagery among indigenous peoples. Reports of such practices, many scholars now argued, were colored by racial prejudice and cultural condescension, resulting in grotesque exaggeration if not outright lies. Cannibalism in particular came under scrutiny. In 1980, Oxford University Press published William Arens’ The Man-Eating Myth: Anthropology and Anthropophagy, which argued that systematic, culturally sanctioned cannibalism was a myth, perpetuated by bigoted Western explorers, missionaries, and scholars. Not a single credible first-hand account of the practice, he argued, could be located. Arens’ book made a significant impression; as a graduate student in cultural geography in the 1980s, I was taught that cannibalism had never been anything but an isolated, aberrant occurrence. Indigenous peoples, according to the newly prevailing orthodoxy of cultural romanticism, lived in harmony with both the natural environment and their fellow humans.

The Arens thesis has not fared well over the past 30 years. Credible reports of systematic cannibalism turned out to be numerous, and direct archeological evidence is now firmly established. Even more problematic for adherents of 1960s-style cultural romanticism is the fact that a number of indigenous peoples themselves have no doubt that their ancestors were cannibals. Many are ashamed of this heritage, and some even fear that it generated curses that continue to plague their societies. As a result, one Fijian village organized a ceremony of apology in 2003, focused on the consumption of the missionary Thomas Baker and his fellow travelers in 1867. According to one participant, “we ate everything but his boots.”

The 2003 ritual of atonement was a massive event, attended by more than 600 people, including the prime minister of the country. Eleven descendants of Thomas Baker also joined the ceremony, where they were asked for, and granted, forgiveness. As the BBC reported, “They were given the traditional drink of kava, and attended ceremonies on Thursday, at which they were to take part in a ‘symbolic cutting of the chain of curse and bondage over the village.’”