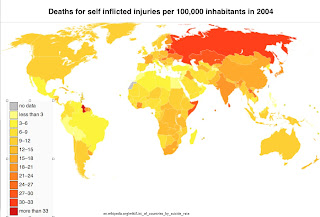 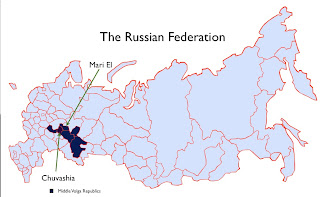 Suicide rates vary greatly from one part of the world to another. As the first map indicates, self-killing reaches its peak over most of the former Soviet Union, and is common across Europe north of the Alps as well as in southern and eastern Asia. Suicide rates are low across most of the Muslim world (with notable exceptions in Somalia, Kazakhstan, and Iraq) and much of Latin America. But one must regard such official data with some skepticism. Where suicide is highly disparaged by religious beliefs, questionable deaths are often classified as accidental. I thus find the World Health Organization’s “0.0” figure for the female suicide rate in Egypt hard to swallow.

At the top of the suicide chart is either Lithuania or Belarus, depending on the source. South Korea, Japan, Kazakhstan, and Russia chart near the top, exceeding twenty-four self-inflicted deaths per 100,000 people per year. Japan’s rate is more than twice that of the United States, and that of Belarus is three times higher. As the U.S. has plenty of suicides itself, the elevated figures of Russia and Japan signal to many observers serious social and psychological problems.

But while the world map of suicide distribution shows significant geographical variation, it actually under-reports it by at least a factor of two. If gargantuan Russia were divided into its first-order constituent units, we would see figures as high as sixty-six per 100,000. The world’s “suicide capital” is not Lithuania or Belarus, but rather the Russian internal republic of Mari El (population 728,000). Mari-El’s neighboring republic of Chuvashia also suffers extremely high rates of self-killing. Nowhere else in the world, evidently, is suicide as common as it is in this part the Volga basin, a fascinatingly diverse and historically significant region that tends to vanish into the undifferentiated Russian vastness.

High suicide rates in the middle Volga seem to be rooted in the region’s cultural background. In regard to the Mari, religious practices are often blamed. Mari El is the last redoubt of animism in Europe, and Christian critics have linked the prevalence of suicide to “pagan” beliefs and practices. As Geraldine Fagan reported in 2002,

According to local Baptist pastor Timothy Gerega, Mari-El has the highest suicide rate in the CIS — up to 17 a week — which he ascribes to the strength of local paganism. “There are usually two rival groupings, each with their own kart [pagan priest], in every village,” he says. “The karts are constantly putting curses upon the other faction.” In addition to prayer gatherings, [Mari anthropologist Nikandr] Popov admits, traditional Mari pagan practices include magic healing and witchcraft.

Such explanations, whatever their merit, cannot hold for the Chuvash, who are have been largely Christian for generations. According to Mark Ames, non-religious cultural traditions provide the key:

Historically, suicide has always played a key role in Chuvash culture. Until a century or so ago, the ultimate form of revenge a Chuvash could take on his enemy was to go into his enemy’s courtyard and hang himself on his doorstep. In the morning, said enemy would open the door and see the avenging Chuvash hanging there, neck snapped, tongue hanging out, eyes bulging. The living lose. Game over: … the surviving Chuvash would never recover from the shame, while the dead, suicidal Chuvash would live on as a man of honor and integrity, a real fighter.

The Chuvashian practice of killing one’s self to spite one’s enemies might seem culturally incomprehensible to most readers. Still, there is a universally recognized power in self-destructive protest. Egypt may have one of the lowest rates of suicide in the world, but recent weeks have seen a spate of Egyptian self-immolations, as young men follow the example of Mohammed Bouazizi, the Tunisian youth whose flaming end sparked demonstrations that took down a regime. As a result, Muslim clerics across Egypt have been denouncing self-sacrifice as un-Islamic, and one hard-core fundamentalist (Salafiyya) leader has gone so far as to assert that, “Whoever tries to commit suicide ‘Tunisian style’ to motivate Egyptians to revolt is a heretic,” destined to Hell. Such religiously inspired denunciations, however, have not yet put an end to politically motivated self-burning across the Arab world.