Yesterday’s geo-quiz was answered correctly by several readers very quickly: the cities indicated are indeed found in Iran. The point of this exercise, however, was not so much to test knowledge but rather to introduce a simple manner of making and using map overlays, appropriate for elementary and secondary schools across the world. Sophisticated and georectified GIS (Geographical Information Systems) overlays are far superior, but GIS is too demanding for basic use. But one can easily manipulate maps and create overlays with user-friendly presentation software. Over the past several years, I have been making such maps with Apple’s Keynote program. Although Keynote files are easily exported to the more commonly used Powerpoint, something is lost in the process. Today’s post shows what Keynote overlays can accomplish when it comes to the mapping of Iran. Later this week, these Keynote and Powerpoint files will be made available for free downloading.

Let us begin with yesterday’s image of the main cities of Iran, mapped according to population size (all figures are placed below the text). From my Keynote slides, I can simply copy this image and then drop it in an outline map of Iran (Figure 2), generating the third figure found here. I can then place the contents of a spatially adjusted city-name image (Figure 4) on the same map, giving us the more complete presentation of Figure 5. Another Keynote slide contains the shapes of all of Iran’s provinces, with Lake Urmia shown in light blue. Here Iran’s internal provincial boundaries are darker than the country’s external boundaries because they have been manually traced, resulting in the superimposition of the borders of neighboring provinces. Boundary thickness and stroke forms are easily changed (the map here uses the thinnest available setting, .25 px). Again, the information from any or all of the previous maps can easily be copied on to this image, yielding Figure 7.  Another map (Figure 8) contains provincial names, the addition of which yields Figure 9. (Note: I have no good reason for spelling the city “Isfahan” and the province “Esfahan,” as either can be used for either.)

With a few easy clicks and keystrokes, the information on these maps can be deleted, transformed, or moved. To illustrate such possibilities, I have done a few a simple manipulation to the map containing the provincial shapes, assigning each province its own particular color (Figure 10). I can then drag and move the shapes, turning the map into a jigsaw puzzle, as can be seen in Figure 11. Reassembling such a map can be a diverting and informative exercise. (My children tell me that the shapes need to audibly “click” into their correct places when moved, but I am not convinced that such a feature is necessary.) It would make an interesting contest to see who could reassemble such a map most quickly. (The resulting puzzle is more easily solved when the country outline [Figure 2] is added.)

The information on all maps was placed by tracing from other maps found in the public domain, using the tools from the “shapes menu” on Keynote. If one were to use a physical/political map as a base-map, one would thus be able to add a rich topography and elevation layer. Unfortunately, I was not able to find a suitable physical map that includes Iran’s provincial boundaries. I have, however, tried to retroactively fit all of the information that I have traced out on an old physical map of Iran and environs (note the existence of the former neutral zone to the west of Kuwait). The fit is far from perfect, as can been seen by comparing the shape of Lake Urmia on the map with that of my overlay in Figure 12 (as a result, I had to adjust provincial boundaries to match the borders of Iran on the physical map). Despite its poor accuracy, the resulting depiction is still useful for general purposes. To show its capabilities, I have increased the width of the provincial boundaries from .25 px to 1.0 px, highlighted Fars and Razavi Khorasan provinces by coloring them purple and red respectively and setting the opacity at 40 percent, and then added red dots for Shiraz and Mashhad and as well as the labels for both the cities and provinces. The results are far from perfect, but are still useful.

Other approximate overlays can be added using information found on other maps. The remaining maps show the rough transference of some of the patterns found on a precipitation map to the previously discussed maps. The key here is Keynote’s opacity/transparency feature, which allows one to see through any given shape; here the shapes that show the more humid regions of Iran are set at 40% and 50% opacity. The final map shows the relationship of Iran’s major cities to both topography and precipitation.

I think that educational game makers could do many interesting exercises with this kind of map overlay system. 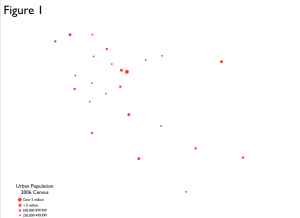 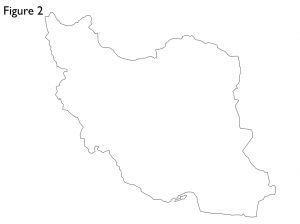 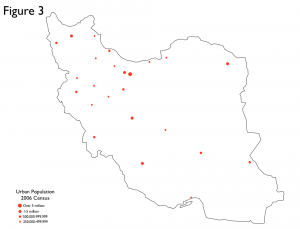 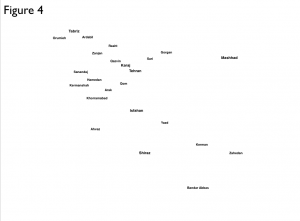 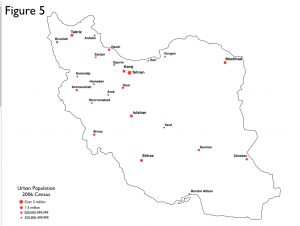 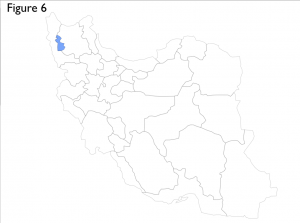 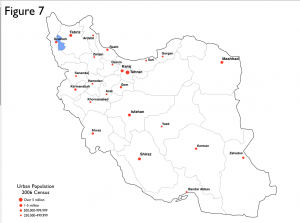 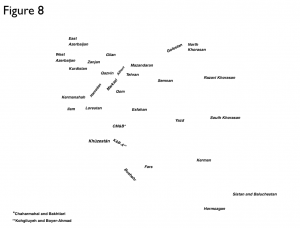 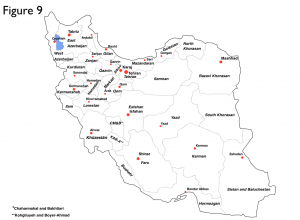 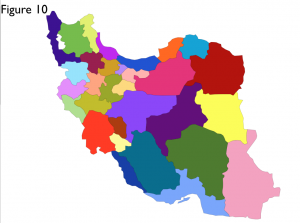 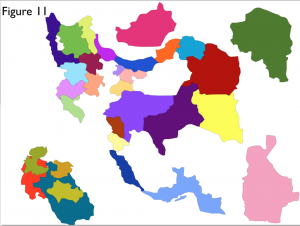 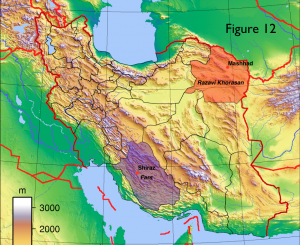 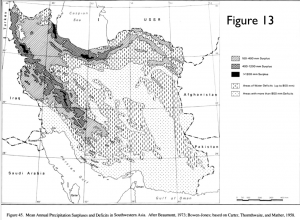 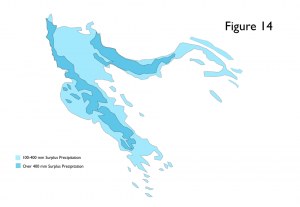 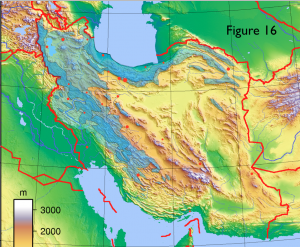