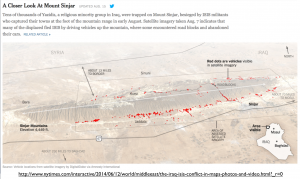 As long-time readers of GeoCurrents may have noted, I have rather mixed feelings about the New York Times. I am often critical of Times articles and columnists, and I find the newspaper’s coverage of world events too spotty and incomplete to be satisfying. But I also start off every morning with the print edition, and I can’t imagine doing otherwise. Sometimes I find the Times truly impressive. A case in point is a current on-line series of maps, photographs, and satellite images called A Visual Guide to the Crisis in Iraq and Syria. I have reproduced a few of the images here — the rest are worth a look as well. 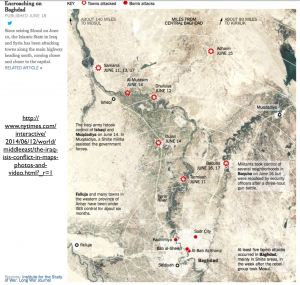 A few words are in order about why I chose these particular images, even though several of them are out of date. In regard to “A Closer Look at Mt. Sinjar,” the detail is simply astounding: one dot for every vehicle! The Time’s hybrid map-satellite-images, such as “Encroaching on Baghdad,” are innovative, informative, and visually arresting. A somewhat similar map, “U.S. Strikes Militants Near Erbil,” puts the issue in an intriguing spatial perspective. One also gets a good sense of the circular layout of Erbil, including the old walled-city, deemed here the “Historic citadel” but sometimes called Hawler Castle (see below)* Satellite photos on the New York 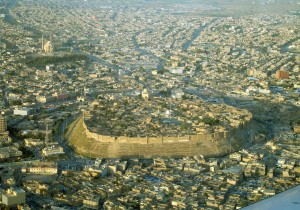 Times’ Iraq-Syria image collection, such as

“Destruction in Kobani,” are also both informative and striking. 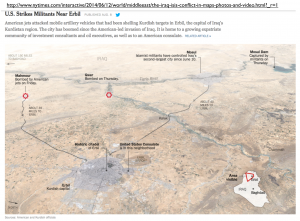 In regard to Kobani itself, I find it interesting that a variant of the city’s Kurdish name has triumphed in the media. When it first came to global attention earlier this year—if my memory serves accurately—the Arabic name `Ayn al-`Arab (“Spring of the Arabs”) was more often used. Evidently, the tendency is to prefer Kurdish names for Kurdish places (The actual Romanized Kurdish spelling of the town, however, is Kobanê rather than Kobani.) But if this tendency were to be carried out to the end, we would have to quit writing about Erbil (or Irbil), the Iraqi Kurdish capital, and instead write of Hewlêr (or Hawler). Perhaps we should, although “Erbil” sounds more evocative to my ear.

Returning to the Times’ Iraq-Syria visual series, it is significant that a number of the maps found here were based on those of Mike Izady, perhaps the world’s most accomplished cultural cartographer. GeoCurrents has examined some of Izady’s maps before, but it is time to revisit them, as he keeps adding to his impressive collection. Posts later this well will examine his recent mapping in more detail.

*According to the Wikipedia, “It has been claimed that the site [the Citadel of Erbil] is the oldest continuously inhabited town in the world.” Other towns, however, make the same claim, such as Jericho. As noted in the Wikipedia article entitled List of Cities by Time of Continuous Habitation, “The age claims listed are generally disputed and may indeed be obsolete. Differences in opinion can result from different definitions of “city” as well as “continuously inhabited” and historical evidence is often disputed.”