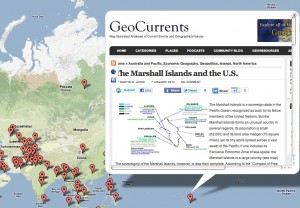 Thanks to the skill and effort of GeoCurrents technical expert Kevin Morton, an interactive map linking to previous blog postings is now available. You can access the GeoCurrents Master Map here, or by clicking the banner at the top of each page for future convenience. Pins have been placed on a Google world map to indicate the locations of specific posts. If one hovers over a pin, the opening section of the relevant post will appear on the screen. The full post can be opened by clicking on the pin. Some pins are keyed to multiple posts, samples of which will appear if the pin is clicked. Posts of global scope are pinned  to Stanford University near Palo Alto, California, the home of GeoCurrents. In some places pins are too clustered to discern, but the map can be easily enlarged to spread them out. Although the Google base-map uses a Mercator projection that severely exaggerates the extent of high latitude areas, it is a fully scalable map, allowing one to zoom in on highly specific locations. Such a feature is very valuable in a map of this kind.

The master map immediately shows which parts of the world have been covered extensively in the blog and which have been slighted. As can be immediately seen if one opens the map, northern Eurasia has few posts and southern Africa has none at all. South America has also received relatively little coverage. I was not fully aware of this geographical imbalance until I saw the finished map. As GeoCurrents aims for global coverage, a number of posts will turn to these neglected areas when intensive blogging of current events resumes in September.