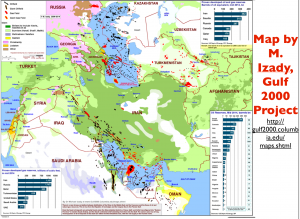 To understand the political situation of the Middle East today, it is necessary to examine the geographical relationships pertaining to political borders, the distributions of religious and linguistic groups, and the patterning of oil and gas deposits. Of particular significance is the fact that many of the largest fossil fuel deposits are found in areas that are not primarily inhabited by Sunni Arabs. Many of the major oil and gas fields are rather found in Shia (and to a lesser extent, Ibadi) regions, and in Kurdish territory. This pattern is especially significant in regard to the oilfields of eastern Saudi Arabia, which are located in a mostly Shia region of a state noted for its hostility to Shia Islam. Just last week, Saudi Arabia sentenced a prominent Shia cleric to death for supporting non-violent protests.

Several years ago, I made my own amateurish map of this issue, focused on Saudi Arabia. I later discovered an extraordinarily detailed and accurate map of the same issue covering a much larger swath of territory. This map made was made by Dr. Michael Izady, a scholar of the Middle East and a cartographer extraordinaire. Izady’s maps can be found at Columbia University’s Gulf 2000 Project, a site that I cannot recommend highly enough. To my mind, Izady is the world’s best cultural/historical cartographer. He has brought cultural mapmaking to a level never before seen, far surpassing all rivals. His map collection is substantial, he continues to produce new maps on new topics, and he continually revises his old maps. Many of his maps simultaneously show cultural and demographic patterns, mapping densely populated areas in darker shades from sparsely settled areas and leaving virtually uninhabited zones blank. Such a cartographic strategy is highly useful—and very difficult to pull off.

For the next week or so, GeoCurrents will be showcasing Izady’s maps. Today’s post is brief, but more detailed essays will follow. 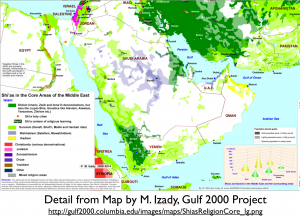 Whenever I study one of Izady’s maps, I find patterns that I had not previously been aware of, making me want to learn more. I also use his maps extensively in preparation for teaching. This afternoon, for example, my undergraduate seminar on the history and geography of current global events will be examining the position of Shia Islam in Saudi Arabia (among other topics), and here Izady’s maps prove crucial. Most important, they show that Shi’ism in the country is by no means limited to the oil-region along the Gulf, although that is the way that the situation is generally portrayed in the media. Note, for example, the large Shia area in southwestern Saudi Arabia adjacent to the Shia portion of Yemen, which in turn has been at the core of the recent turmoil in that country. But despite the obvious importance of this issue in Yemen, the situation of the followers of Zaidi Shi’ism in adjacent areas of Saudi Arabia is almost never mentioned in the media. 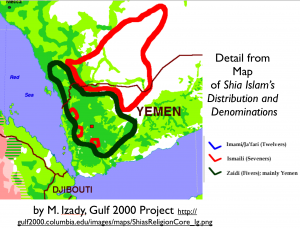 But it gets much more complicated than that. The detail of Izady’s global map of Shia Islam posted to the left shows that the Zaidi sect is not the only branch of the Shia faith found in southwestern Saudi Arabia, as the Ismaili sect is represented as well. Izady’s map of 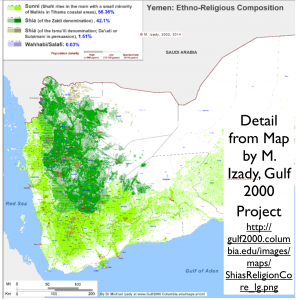 religion in Yemen shows the Ismaili areas of that country in extraordinary detail. Ismaili Islam is itself a complex branch of the faith, with numerous divisions of its own and a fascinating history (and one in which Yemen plays a major role.) If I had the time, I would now be delving into the persecuted Ismaili faith in Saudi Arabia’s Najran province. As Wikipedia notes, “In Najran city, the Khushaiwa compound, with its Mansura mosque complex, is the spiritual capital of the Sulaymani branch of the Ismaili sect…” But as it is, I must turn away from such matters and prepare for class! More later…