Customizable Maps of Switzerland and Poland, and Swiss Per Capita GDP by Canton 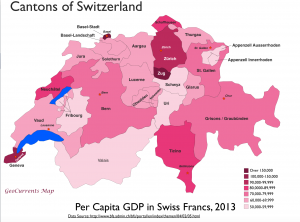 In making the per capita GDP map of Switzerland, I was somewhat surprised by disparities found among the country’s cantons. The high levels of economic production found in Geneva, the city of Basel, and Zurich were not unexpected—but that of Zug was. But as it turns out, the answer here is simple. As noted in the Wikipedia article on the canton:

The capital Zug is home to a large number of companies which only have their headquarters in the city. This is the case because Zug has one of the lowest taxes in Switzerland. Trade in particular is of great significance. There are a large number of small and middle sized businesses in all areas of the economy. There are over 24,300 registered companies and over 70,000 jobs in the canton, with 12,900 of the registered companies in the city of Zug. 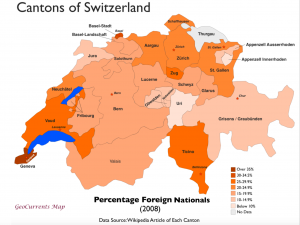 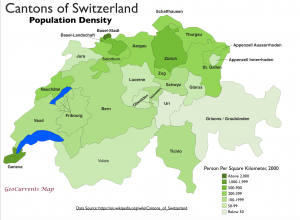 I was also a little surprised by the high level of per capita GDP in remote and lightly populated Grisons/Graubünden. High-end tourism seems to be the main reason. As noted in the Wikipedia article on the canton:

24 per cent of the workforce are employed in industry whereas 68 per cent work in the service industry where tourism reaches a remarkable 14 per cent of the GDP. Tourism is concentrated around the towns of Davos/Arosa, Flims and St. Moritz/Pontresina. There are, however, a great number of other tourist resorts in the canton, divided by the official tourist board for winter sports for example into categories “Top – Large – Small and beautiful” -yet still not including all of them.