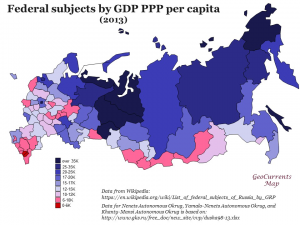 As previously noted, GeoCurrents will be giving away a significant number of customizable maps over the next month or so. These maps are constructed with simple presentation software (available in both PowerPoint and Keynote formats), and hence are very easy to use and manipulate. A post later this week will offer some pointers on how to customize these maps. To download these maps, just click on the file names at the bottom of the post. (For this post, Keynote = “Customizable Maps of Russia” and PowerPoint = “Russia Customizable Federal Subjects Map.” It is important to note that all of these customizable maps have been made in an older version of Keynote, which I find superior to the current version.)

Today’s offering is of Russia. The basic GeoCurrents customizable map of Russia has been divided into its 85 constituent units, which are officially known as Russia’s federal subjects. Included here are Russia’s two new federal subjects (as of 2014), Crimea and Sevastopol, which are outlined with a dashed line to indicate that their annexation by Russia from Ukraine is disputed.

One can easily change the color of any of these units in order to make thematic maps. I have included above a map of Russia’s gross regional product by federal subject, which was made by Asya Pereltsvaig, to illustrate what one can do with these base-maps. This map illustrates nicely the high levels of economic production found in the resource-rich regions of northern and central Siberia, the economic disparities between Moscow & St. Petersburg and the rest of European Russia, and the low levels of economic production found in the north Caucasus and across much of southern Siberia. (As the economic map posted above uses 2013 data, Crimea and Sevastopol have been excluded.)

Russia’s 85 federal subjects are divided into different several categories, as specified in the county’s constitution. These are as follows: 46 oblasts; 22 republics; 9 krais; 4 autonomous okrugs; 3 federal cities; and one autonomous oblast. The actual differences among these varied types of federal subjects are not particularly large. Krais, for example, are (according to the Wikipedia) “essentially the same as oblasts. The title “territory” [or krai] is historic, originally given because they were once considered frontier regions.” Russian republics, however, do have somewhat more autonomy than the other federal subjects. As again is noted by the Wikipedia: “[Russian republics are] nominally autonomous, each has its own constitution and legislature; is represented by the federal government in international affairs; [and is meant to be home to a specific ethnic minority.”