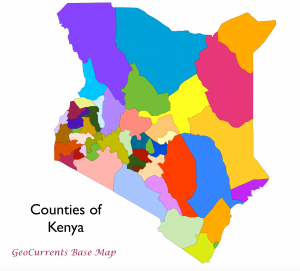 Today’s GeoCurrents post offers free customizable maps of Kenya, Ghana, Ethiopia, Belgium,and South Korea. All are based on the main subdivisions of the countries in question: counties in the case of Kenya, regions in that of Ghana, regional states (kililoch) in that of Ethiopia, and provinces in those of Belgium and South Korea. Since many of Kenya’s counties are relatively 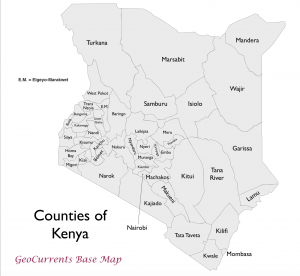 small, I have created two versions of this map, one with and one without name labels. As in previous offerings, these maps are constructed with simple presentation software (available in both PowerPoint and Keynote formats), and hence are very easy to use and manipulate. 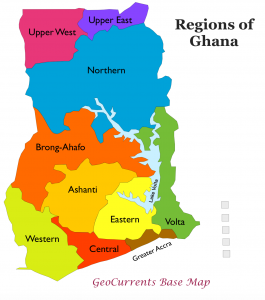 There are several problems with depicting such divisions of national territories. One concerns the translation into English of local terms for administrative divisions. The main divisions of Ethiopia, for example, are called kililoch locally. This term has been variously translated as state, region, or regional state. As Ethiopia’s ethnically based divisional scheme is unusual, I have used the least usual term: regional state. 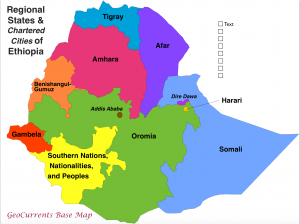 Another problem is the fact that several of these countries have more than one category of primary administrative division. Ethiopia, for example, is divided into both kililoch and chartered cities. I have noted this on the map by using smaller font and italics for the two chartered cities, Addis Ababa and Dire Dawa. In South Korea the

situation is rather more complicated, as the country is divided into: “8 provinces (do 도/道), 1 special autonomous province (teukbyeol jachido 특별자치도/特別自治道), 6 metropolitan cities (gwangyeoksi 광역시/廣域市), and 1 special city (teukbyeolsi 특별시/特別市).” As a result of such complexity, I have merely mapped South Korea’s main administrative divisions. 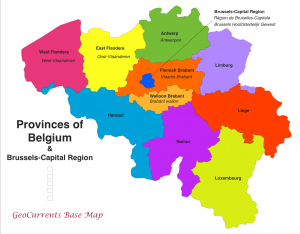 I hope to post the rest of my customizable maps over the next several days.