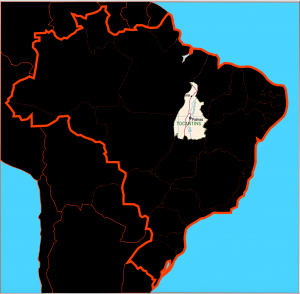 GeoCurrents is continuing its initiative of providing free customizable maps. Today’s offerings are of Brazil and Colombia, based on their first-order administrative divisions (states in the case of Brazil; departments in that of Colombia). The Brazil maps also includes portions of neighboring countries, and one of its versions includes as well the map on which it was constructed, which allows one to “reveal” individual states, as demonstrated here for Tocantins. As in previous offerings, these maps are constructed with simple presentation software, and are available at the links at the bottom of this post in both PowerPoint and Keynote formats.

I have used the Brazil base-map to make several thematic maps of the country. The purpose here is mainly to demonstrate the significant socio-economic progress that Brazil has made since 1990. The current economic and political situation of the country is, of course, grim. As noted in a recent Forbes article, “According to the weekly Focus survey by Brazil’s Central Bank, 2016 will herald a depression-era contraction rate of 3.8% this year instead of the previous estimate of 3.5% made by dozens of Brazilian economists at the big banks.” The detention of former president Luiz Inácio Lula da Silva (“Lula”)—seen by many Brazilians as the main architect of their country’ recent social progress—underscores the current political crisis, although some observers think that his arrest indicates the strength of Brazilian democracy. 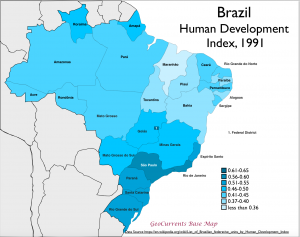 But regardless of what one thinks of either Lula or of Brazil’s current situation, the progress that it made in the last decade of the 20th century and the first decade of the 21st is difficult to deny. Consider, for the example, the composite Human Development Index (HDI), which takes into account education, longevity, and income. Here we see that the highest 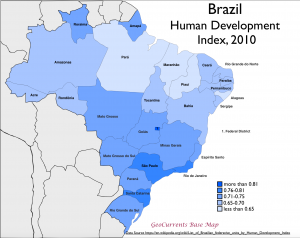 ranking unit in 1991, the Federal District (Brasília), scored lower than the lowest ranking state (Alagoas) did in 2010 (0.616 vs. 0.631). Other countries have also seen major improvements in their HDI figures over this period, but few have made gains as large as those of Brazil. As the maps posted here show, the geographical patterns of Brazilian HDI did not change much during this period. The large interior state of Mato Grosso, noted for its soy boom, did register a particularly large jump, however. 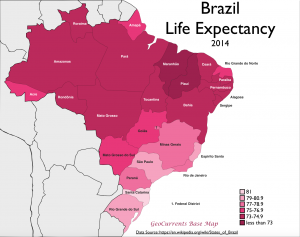 I also mapped more recent data for life expectancy and infant mortality, found on the Wikipedia page of the states of Brazil. In terms of life expectancy, the northeast no longer appears as the worst-off part of Brazil. Instead, the north as a whole occupies most of the lower categories. It is interesting to see that Mato Grosso does not show particularly well on this 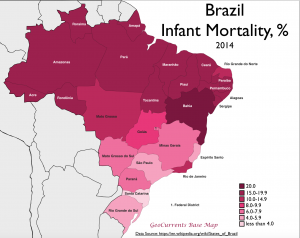 map, which may indicate that its recent gains have been more in the economic than in the social sphere. Somewhat similar patterns are found on the map of infant mortality. Here I am surprised by the low showing of the state of Rio de Janeiro and by the very low showing of Bahia.