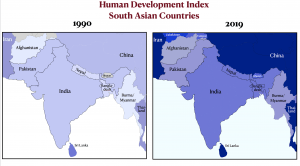 One of my take-home messages for college geography students is that the world is probably both in worse shape and in better shape than they realize: in the geopolitical context of war and conflict, conditions are worse than might be expected from a casual reading of the news, whereas in regard to human development they are considerably better. Over almost all of the world, Human Development Index (HDI) scores have increased over the past thirty years, and in most places they have done so to a significant degree. 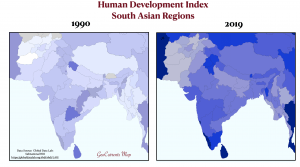 Greater South Asia has seen particularly large increases in human development, as is made clear by looking at the paired maps posted here. Not just every country in the region, but almost every major political subdivision has seen major gains in health, education, and average income. But it is also evident that regional HDI disparities have increased in the same period. Some places have made far greater gains than others. 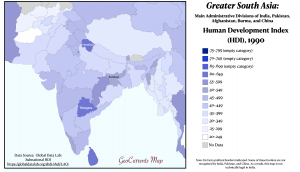 In the regional map of HDI levels in 1990, three Indian states have anomalously high figures in 1990 – almost as high as their 2019 figures: Uttarakhand, in the north, Telangana in the center, and Jharkhand in the northeast.  Significantly, none was a state in 1990. At that time, all belonged to other states (Uttarakhand was then part of Uttar Pradesh, Telangana was part of Andhra Pradesh, and Jharkhand was part of Bihar). I suspect that statistical irregularities play a role in 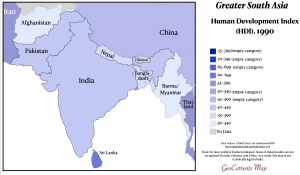