(Note: Today’s scheduled post on language and nationalism needs more work and therefore its publication will be delayed).

On a map of the World Bank’s Human Development Index divided into the standard categories, South Asia (India, Pakistan, Bangladesh, Nepal, Bhutan, and Sri Lanka*) is depicted as a land of “medium” development, better than central and north-central Africa, but worse than most of the rest of the world. Sri Lanka is an exception, falling instead into the “high development” category. This data, however, was collected before Sri Lanka’s recent economic melt-down. Presumably its HDI figure will decline. 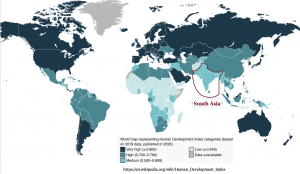 When South Asia’s HDI rankings are broken down into finer categories and mapped in their regional context (one covering Burma and Afghanistan as well as portions of neighboring countries), several spatial patterns are evident. Here India, Bangladesh, and Nepal appear at a medium developmental level, and are flanked on the east and northwest by countries of lower ranking (Burma [Myanmar] and Pakistan & Afghanistan respectively). Bracketing “Greater South Asia” as a whole, one finds countries with much higher HDI levels (China, Iran, and Thailand). 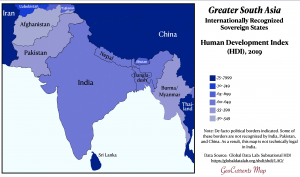 These patterns vanish, however, when the larger countries of the region are broken down into their first-order administrative divisions (states, provinces, regions, etc. **). On this map, the borders between countries are hard to distinguish, and sometimes disappear altogether. China may have a much higher HDI level than India, but many Indian states post higher figures than the neighboring Chinese region of Tibet. 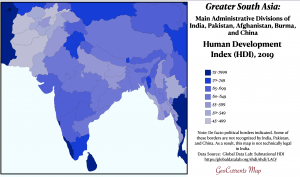 The rest of this post looks at parts of this Greater South Asia that have low HDI figures relative to the rest of the region. Later posts will examine areas with relatively high HDI, as well as regional developmental discrepancies. 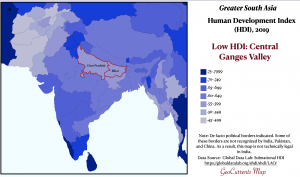 South Asia’s most heavily populated area, India’s central Ganges Valley, is characterized low HDI. This region, consisting of the states of Uttar Pradesh and Bihar, is home to some 312 million people; it would be the world’s fourth most populous country if it were independent. The central Ganges Valley is a generally flat area with fertile soils and plentiful water (especially in the east). It is also the historical heartland of South Asia civilization. Its economic and social development, however, lags behind the rest of the country. Not coincidentally, Bihar and Uttar Pradesh are also known for their high levels of corruption and their caste and religious tensions. 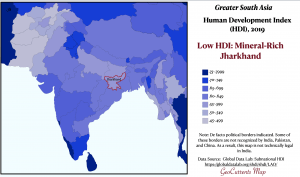 To the south of Bihar is the Indian state of Jharkhand, also characterized by low levels of social development. Ironically, it has India’s richest mineral deposits (especially coal) and has therefore been described as an example of the “resource curse.” Most of Jharkhand is a hilly plateau, and it has a large number of adivasis (“tribal people”). It has also been the site of numerous Maoist (Naxalite) attacks on governmental institutions. 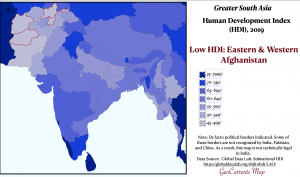 Lower levels of human development are encountered in South Asia’s northwestern fringe. Both the western and eastern parts of Afghanistan, encompassing areas of both Pashtun and Tajik ethnicity, post very low HDI figures. Significantly higher levels are found in central Afghanistan, especially in and around Kabul. Across the country, HDI levels showed significant increases in the first two decades of the century. It will be interesting to see how they change with the Taliban back in power. Preliminary indications are not positive. 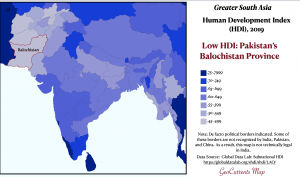 Very low levels of human development are also found in Pakistan’s Balochistan region, the country’ largest and most mineral-rich province. Not surprisingly, the ethnically distinct people of this area (mostly Baloch and Brahui) have been in periodic rebellion for decades. Baloch insurgents have recently launched attacks on Chinese-financed infrastructural projects in their region, which they see as benefitting the rest of Pakistan rather than themselves. While 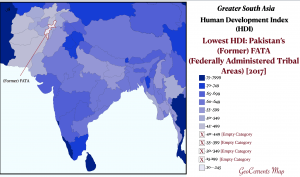 Balochistan as a whole posts an HDI figure of only .48, some of its internal districts have much lower numbers still. According to one source, Awaran, known as Pakistan’s “oasis of dates,” has a shockingly low HDI figure of only .17 (2017 data). Outside of Balochistan, the same data source claims that Pakistan’s former FATA region (“Federally Administered Tribal Areas”) had a similarly miserable figure of .22 in 2017. In 2018, this previously largely unadministered region of Pashtun ethnicity was merged with the neighboring state of Khyber Pakhtunkhwa. It still has one of the world’s lowest levels of female literacy. (Other sources give the dismantled FATA a substantially higher HDI figure of .46 [in 2019].) 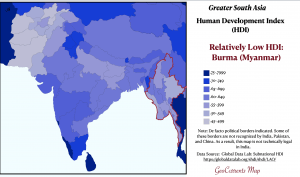 Burma (Myanmar), although not conventionally classified as part of South Asia, also deserves a closer look. The country as a whole has a relatively low HDI figure despite its abundant resources and historical legacy of economic and social development (the noted historian Victor Lieberman thinks that Burma may have had the world’s highest level of literacy in the 1700s.) Intriguingly, Burma’s areas of particularly low development are not found in its marginalized, non-Burman, “tribal,” upland peripheries (more on this in the next most). The country’s profound “lowland/highland” and “Burman/ethnic minority” cleavages are not visible on this map. 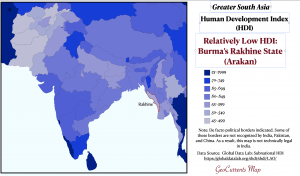 Within Burma, a particularly low level of development is found in coastal Rakhine state. Known historically as Arakan, this area long formed an independent kingdom. The Arakanese people speak a language (dialect?) that is very closely related to Burmese. And like the Burmese-speaking ethnic Burmans, most of them follow Theravada Buddhism. Their lands have rich agricultural, marine, and forestry resources. But owing in part to its low levels of development, Rakhine is a restive region. The nationalist Arakan Liberation Army has recently ramped up its attacks on the Burmese state. The Arakan Liberation Army is also hostile toward the Muslim Rohingya minority, which until recently lived in the northern part of the region (vast numbers of Rohingya have been violently expelled from Burma). 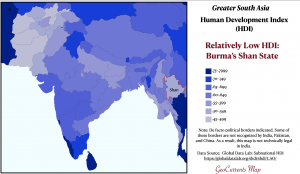 Burma’s eastern Shan state posts an HDI figure lower than that of Rakhine, coming in at just over .5. The Shan state covers an upland plateau with some rugged topography and remote locales. It is not, however, a “tribal” area in general. The Shan themselves are a Tai-speaking people who also practice Theravada Buddhism. They were historically organized into small but military potent principalities. In the eighteenth and early nineteenth centuries, Burma and Siam (which became Thailand) competed over gaining control of this sizable area, with Burma eventually coming out on top. In the late twentieth century, it became a focal point of the narcotics trade. For a time, the insurgent Shan State enjoyed effective independence. In the late 1900s, however, the Burmese government defeated the Shan military, made possible by its alliance with the drug-running United Wa State Army. (The Wa are a “tribal’ people living in the northern part of Shan state.). The entire region is still noted for its narcotics trade and ethnic conflicts.

*The Maldives, another South Asian country, is excluded here due to its very small population. Like Sri Lanka, it has a relatively high level of human development (HDI of .74).

** The provinces of Afghanistan have been amalgamated into larger informal regions by the data source used here.