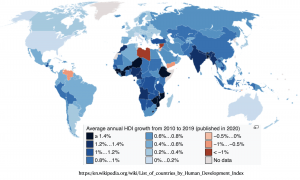 Several recent GeoCurrents posts have noted substantial improvements in human development over the past several decades, as measured by the human development index (HDI). As the first map posted here shows, some of the world’s least developed countries have experienced the largest gains. Only a few countries saw HDI values decline from 2010 to 2020 (Libya, Syria, Lebanon, Yemen, Venezuela, Jordan, and Timor Leste). 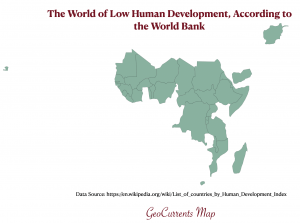 Although sub-Saharan Africa registered impressive improvements, it still has the world’s lowest HDI figures, and by a substantial margin. A world map showing only countries in the World Bank’s “low human development” tier, posted here, includes just three countries outside of the region (Haiti, Yemen, and Afghanistan). Within sub-Saharan Africa, however, much of the west and most of the south are excluded.

The World Bank’s HDI tiers might not be the best way to the categorize human development standings. Are we really expected to believe that Papua New Guinea has a “medium” level of human development? (Admittedly, it just barely makes this category.) The thresholds for the categories seem be too low to accurately represent public conceptualization of this issue. The index might also underestimate income levels, putting too much emphasis on education and health. Finally, the numbers used to generate the index are not necessarily accurate – particularly in the poorer parts of the world. 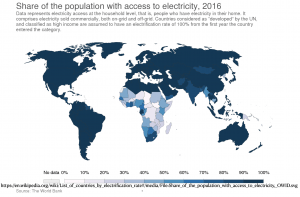 One relatively easily measured metric clearly shows that sub-Saharan Africa, or at least its central-interior portion, is by far the least developed part of the world: electricity access. The numbers here are shocking. Whereas countries as poor as India, Pakistan, and Bangladesh have achieved full electrification, Chad and Burundi still had electrification rates below 12 percent in 2016. In several areas, the situation has deteriorated since 2020. As a recent Brookings report notes: