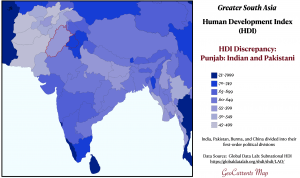 Today’s post examines an interesting human developmental disparity in South Asia: that of the Punjab. When British India was partitioned into Pakistan and (independent) India in 1947, so too was the Punjab, an agriculturally productive cultural region that was united by language and culture but divided by religion (between Muslim, Hindu, and Sikh communities). Partition in Punjab was a horrifically violent process, but the region soon began to experience economic growth and social development. Such developments, however, proceeded at a much faster pace in the Indian state of Punjab than in the Pakistani province of the same name. As can be seen on the map posted here, the HDI ranking of Indian Punjab is now significantly ahead of that of Pakistani Punjab.

As Punjab is Pakistan’s most populous and economically productive province, its low HDI figure depresses the developmental standing of the country as a whole. Considering the many similarities of the two Punjabs, it also indicates problems with Pakistan’s governance. Simply put, a much better record in human development has been achieved in India. It might be tempting to argue that this is a matter of religion, as Pakistani Punjab is almost entirely Muslim whereas Indian Punjab has a Sikh majority and a large Hindi minority. But Muslim Bangladesh, once widely regarded as South Asia’s economic and social “basket case,” has also achieved a higher HDI level than Pakistan’s Punjab. 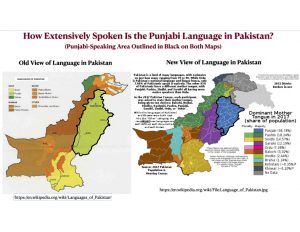 But it must also be noted that the southern half of Pakistan’s Punjab is not exactly “Punjabi,” at least in linguistic terms. Its local language, Saraiki, was once regarded as merely a Punjabi dialect, but it has now been given status as a separate language. The Saraiki-speaking parts of Pakistan’s Punjab are much poorer and less developed than the province’s Punjabi-speaking areas. Most of Pakistan’s districts that post relatively high HDI figures are located in northern (Punjabi-speaking) Punjab. 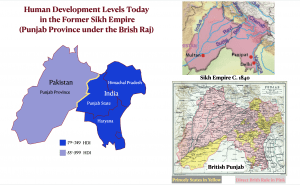 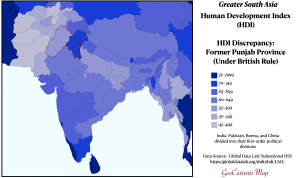 It also interesting that all of the Indian states of the former Province of Punjab under the British Raj now have relative high levels of human development, regardless of their language and culture. After Indian independence, the non-Punjabi-speaking (mostly Hindi-speaking) areas of this province were hived off as the separate states of Haryana and Himachal Pradesh. All have done quite well. It is also interesting that all of these areas, on both sides of the international border, constituted the Sikh Empire in the first half of the nineteenth century