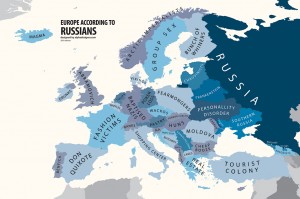 The labels in the European maps that make up the bulk of the series offer intriguing geopolitical perspectives. “Europe According to Germany,” for example, evokes Germany’s greater pre-World War II territorial extent, referring to the Baltic states as “old neighbors.” In “Europe According to Russians,” Eastern Ukraine, which has a predominant Russian population and favors Russia in foreign policy, carries the tag “Southern Russia.” In the same map the Russian clientstates of Abkhazia and South Ossetia appear as “brothers” and “sisters,” respectively. The map of France’s view of Europe labels Algeria as “France woz here,” alluding to the country’s former status as a part of France, but neglects to include the erstwhile colonies of Morocco and Tunisia. 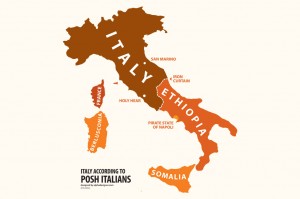 “Italy According to Posh Italians” is of particular interest. This map highlights the frustration of many in the wealthier north that their disproportionate tax payments help support the poorer south. Sicily and southern Italy appear with the demeaning labels “Somalia” and “Ethiopia,” respectively. “The World According to Israel,” one of the few non-European maps from Mapping Stereotypes, portrays the country as self-centered, placing it in the middle of a diagram reminiscent of a schematic of the solar system. The map represents Iran as rogue space debris and the United States as a planet orbiting close to Israel, on which the disputed territories of the West Bank, Gaza Strip, and Golan Heights appear as “sun spots.” 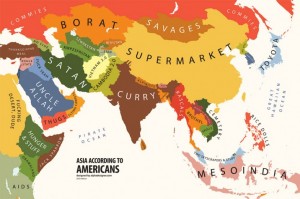 The collection includes several maps from the perspective of the United States. These echo the themes found in similar farcical maps, sharing the ascription of communism to Russia, mass-produced goods to China, and AIDS to Africa. However, some of the labels seem uncharacteristic of an American perspective. While the maps mock American ignorance of the world, they in certain cases presuppose detailed geographical knowledge in the American public at large. It seems unlikely that the person who would associate the country Turkey with a “Thanksgiving meal” or refer to Turkmenistan and Uzbekistan as “Kwpzsfrstan” and “Szwrkstan” would be knowledgeable enough to associate the Tupamaro movement with Uruguay. The same map also labels Indonesia as “Mesoindia,” a term that makes little sense.

Mapping Stereotypes is an impressive collection of farcical maps that, while sometimes unusual and confusing, offers a great range of insights into how different peoples view the world.