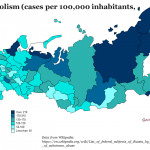 In the previous post, I examined regional differences in demographic issues across Russia. As many sources note, alcoholism is one of the biggest factors contributing to low life expectancy and high rate of death from non-natural causes. In fact, Russia ranks at the top in terms of both alcohol consumption (especially by men), as discussed in detail in my earlier …

The Role of the Caucasus in Russian Cultural and Intellectual History

(by guest blogger Vitaliy L. Rayz, in collaboration with Martin W. Lewis)
The present GeoCurrents series has focused on the peoples of the Caucasus, examining Russia and Russians only insofar as they have impacted the region. But the Caucasus has played a significant role in the politics of Russia, and in its cultural history as well. The most prominent Russian poets …

The Gulag system began under Lenin as a means of ‘Re-Education through Labor,’ and was expanded exponentially under Stalin. Twenty to Thirty Million people were imprisoned in concentration camps that stretched across the whole of the Soviet Union. The Gulag system was significantly de-intensified under Nikita Kruschev in 1960, but by that time, millions had