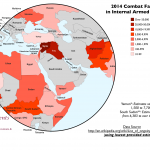 (note: The introduction to this post is found in the post of April 1)
Thus far we have examined a number of geopolitical anomalies in a sizable region of the world centered on Saudi Arabia. We have not yet looked at the most serious challenge to the standard model, however, that of state collapse. Other important issues remain to be considered …

The use of the term “failed state” has surged over the past fifteen years, as can be seen in the Google N-Gram posted above showing the frequency of the term’s occurrence in scanned books. A January 8, 2011 Google news search for “failed state” yielded—in the first twelve articles alone—stories on Sudan, Mexico, Egypt

News stories have been coming out for months on the continuing failure of Belgium to form a government after the June 2010 election. On January 6, 2011, the BBC announced that two Flemish parties were yet again demanding “adjustments” to a compromise plan crafted by the mediator of the Belgian king. On the face

Concerns that Yemen could become a failed state have recently mounted. The country has a weak central government, faces separate rebellions in the north and south, and contains a considerable al Qaeda contingent. The northern rebellion attracts most international attention, as it has