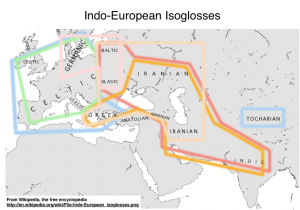 We have received a few complaints that GeoCurrents is focusing almost exclusively on a specific controversy in historical linguists, and that as a result it is ignoring other issues of interest and concern. We will readily admit that we been somewhat obsessive of late, as we find this particular issue deeply fascinating and highly significant from an academic perspective—although maddening as well. But we are approaching the end of the current series. We currently anticipate two more weeks of posts on Indo-European linguistics, after which the site will revert to its more typically varied and eclectic range of topics. But that does not mean that we will be abandoning this particular issue. On December 13th, Asya and I will be delivering a talk at Stanford University on the “Mis-modeling of Indo-European Languages,” which will be co-sponsored by the Stanford Linguistics Department and the Stanford programs in the History of Science and World History. We will subsequently decide whether we should try to publish our work on this subject or merely archive it in a special series on the GeoCurrents site.