I am sorry to say that GeoCurrents will be taking its annual summer vacation for the next five or six weeks. During this time, several guest posts may be run, but I will not be contributing any posts myself. For the next two weeks, my attention will be focused on grading papers and examinations and on finishing the book manuscript on Indo-European linguistics that Asya Pereltsvaig and I have been working on for some time. After that, I will be traveling in South Africa and perhaps Swaziland.  GeoCurrents should be able return in full strength in mid or late July. 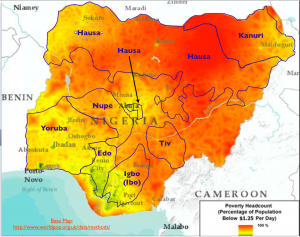 In taking this blogging holiday, I am leaving a number of maps and posts of Nigeria half-finished.  Perhaps I will return to these next month, or perhaps I will simply move on to other matters. As a sample of this unfinished work, I have posted here simple and rather crude map that entails an overlay of  ethno-linguistic patterns on a map of poverty in Nigeria that was posted and discussed previously. If the map and the overlays are accurate, some interesting features are revealed, such as the correlation of the Edo language group (associated with the early-modern Kingdom of Benin) with much lower-than-average poverty levels and the division of the Ibo group into a wealthier south and a poorer north. I wish that I had time to do more research on these intriguing patterns!