GeoCurrents will be taking an end-of-the-year break; regular postings will resume in the second week of January. During the break, plans will be made for renovating and expanding the site. In January, blog postings will increase from the current two or three per week to four or five per week. New features will also be added, focused on providing brief coverage of geographically significant news stories from around the world that are neglected by the mainstream press. According to current plans, the fully refurbished site should come on-line by April 2012.

The GeoCurrents team will also expand. In addition to myself and Kevin Morton, Asya Pereltsvaig, frequent commentator and author of the Languages of the World 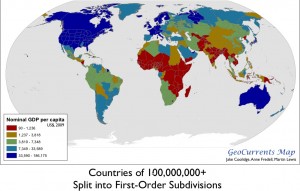 weblog, will be joining the project. As the site grows, other contributors may join the team as well.

During the end-of-the-year break, periodic “housekeeping” posts may appear on the site. Today, for example, I have posted an additional map from the Demic Atlas project that was carried out this summer by myself, Jake Coolidge, and Anne Fredell. This map shows nominal per capita GDP (2009, in US$) for all countries with fewer than 100 million inhabitants and for all first-order subdivisions of countries with more than 100 million inhabitants. Some patterns that are invisible in both the standard state-based framework and the demic framework are apparent in this map. Russia, in particular, takes on a distinctive appearance. Here the lightly populated but oil- and gas-rich districts of western Siberia fall into the highest category, whereas the North Caucasus, as well as parts of European Russia and eastern Siberia, fall into the second-lowest category. In Indonesia, the resource-rich province of East Kalimantan stands out, contrasting sharply with the much poorer southeastern reaches of the country. In Nigeria, a distinct north/south division is visible.