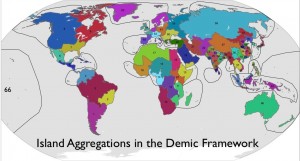 The Demic Atlas project will conclude at the end of this week; next week’s posts will return to the standard GeoCurrents model, examining local issues of geographical significance. Today’s map merely shows which island groups are associated with which regions in the demic framework. As the map is self-explanatory, no further comment is provided. Tomorrow I will respond to the comments that have accumulated over the past few days—my apologies for not having done so already.

As originally envisaged, the Demic Atlas would have contained a number of maps showing the spatial patterning of a wide variety of development indicators. Depictions of literacy, average age of schooling, fertility, mortality, sex ratio and so on would have been included. As we have discovered, however, such information is simply not available in comparable form for most of the sub-national units used to construct the demic framework. Even for the indicators that were mapped (GDP and HDI), problems of data comparability compromised the project in several ways. Yet such difficulties were instructive in their own right, reinforcing the central thesis underwriting the entire project: sovereign states (and their dependencies) so dominate the realm of global data collection and collation that they systematically distort our view of the world. One can gather relatively solid information at the provincial level for most large countries, but only if one does so in isolation from the rest of the world, thwarting the comparison of units of like size. Although the states of India and the provinces and other first-order divisions of China are country-sized units, they cannot readily be contrasted with each other in a single framework. Outside of Europe, choropleth maps integrating data for a number of countries at the sub-state level are, to say the least, challenging to produce.

Further mapping of developmental indicators within the demic framework will therefore not be forthcoming. The remaining atlas posts will take up another issue, that of the variable methods one can use to construct maps out of a single set of data. Quantitative information can be broken down in many different ways, producing divergent images when translated into cartographic form. The maps posted last week, for example, divided GDP and HDI figures at regular intervals to yield subsets of equal size. Seven such quantiles were used, but the data can just as easily be broken down into more or fewer categories. The information set can also be divided in completely different ways; using “natural breaks,” for example, allows one to keep areas that deviate slightly from each other within the same categories. The remaining posts in this series will therefore focus on alternative methods of mapping the information in the Demic Atlas database. This endeavor will reveal otherwise invisible spatial patterns while also showing how the same set of information can yield strikingly different maps depending on how it is arrayed.  Such maps will be constructed in both the demic and the state-based frameworks.