The customizable maps that GeoCurrents is releasing to the public have many potential classroom uses, as this post will seek to demonstrate. Manipulating such maps is a good way to learn some of the fundamental elements of cartography, and can be useful as well for gaining basic geographical knowledge. It is one thing to merely look at a map, and quite another to actively engage with it.

My example today concerns the population density of California. With 39 million inhabitants, California is by far the most populous state in the USA, with 12 million more residents than second-place Texas. But California is not particularly densely populated, ranking only 11th on this score among U.S. states. But all such measurements obscure the extremely uneven nature of the distribution of California’s people. Large expanses of the state are almost uninhabited. 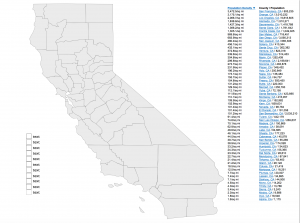 My starting point for a classroom exercise on this matter would be a customizable map of the counties of California coupled with a ranked list of those countries by population density (see the map to the left). I would then ask the students to construct a population density map of California based on this data, using whatever color scheme and break-points in the data that they see fit. If one uses an unlabeled base map, as shown here, students will have to figure out where each county is located before they assign it to a color category. An easier alternative assignment would be to begin with a labeled map. In this case, however, the small counties (such as Sutter, Alameda, or Orange) can be difficult to color, as when one “clicks” on them 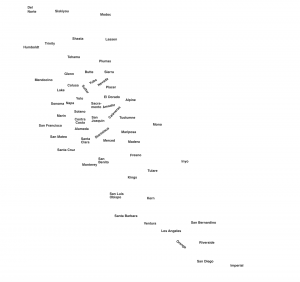 one will actual click on the name-tag rather than the shape. These name-tags, however, can be dragged away and then replaced after the color has been assigned. If the map is filled in without the county names, the labels can be restored by using the “select all” feature on a county-name-only map (posted to the left), copying what has been selected, and then pasting it on to the colored population density map. Black-letter names placed on dark-colored counties will then have to changed to white to make them legible. (The county-name-only map is available for download in the PowerPoint and Keynote files this post, along with several other maps used in this post.) 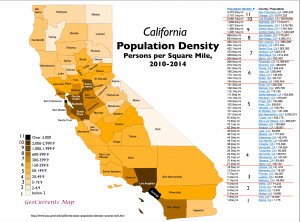 It would, of course, be useful at some point to provide students with a model of a map constructed in such a manner, as with the one posted to the left. Here one can see how I categorized the raw data, splitting it into 11 groups. I usually try to limit such divisions to no more than nine, for the simple reason that Apple’s Keynote program provides a handy 9X12 color 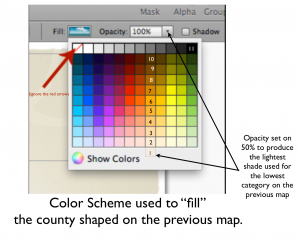 matrix, with a 10th row for white-black (see the illustration). In this case, however, the vast differences in the values being mapped—from 1.6 to 3,472—seemed to demand more categories. I thus used black for the highest category, and for the lowest I took the lightest color in the sequence 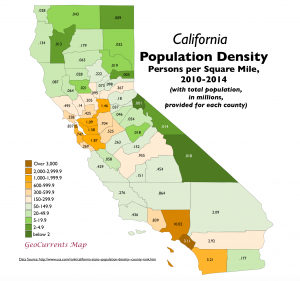 and set the opacity to 50%, lightening it still further. An alternative for a map with numerous categories is to use a two-color scheme, as illustrated to the left. I prefer this kind of map whenever the value range is large, as it emphasizes extremes. Many people tell me, however, that they find such maps difficult to interpret. Another way to signpost extremes is to provide the actual figures on the map itself, which I have done here, albeit using total population rather than density. As can be seen, the populations of California’s counties vary by roughly four orders of magnitude, ranging from a little over 1,000 in Alpine to more than 10 million in Los Angeles. 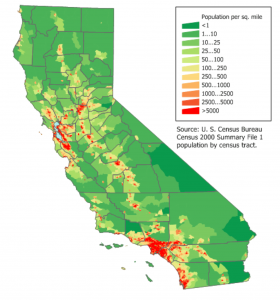 Once the population-density-by-county mapping exercise has been completed, it is important to point out its limitations. This step can be accomplished by contrasting the maps that the students have made with a map showing population density at a much finer level of analysis. As can be readily appreciated by viewing the map posted to the left, it is somewhat misleading to focus on overall population density figures for many if not most California counties. This issue is especially acute for a huge county such as San Bernardino, which is larger than nine U.S. states. As can be seen on the map, the vast majority of San Bernardino’s two million residents live in the far southwestern corner of the county. The rest of the county is sparsely inhabited desert. 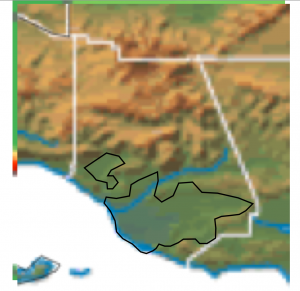 Many California counties are characterized by such highly uneven population distribution patterns. Los Angeles County, for example, has an extraordinarily sharp north-south population gradient. In neighboring Ventura, almost no one one lives in the entire northern half of the county. In most cases, such patterns are easily explained on the basis of physical geography. To illustrate this, I placed an expanded section of the population density map showing Ventura County hidden below a depiction of the 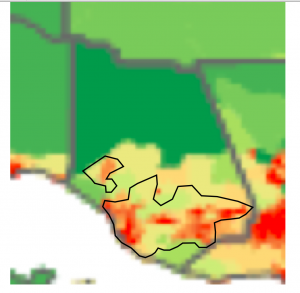 county’s topography. I then roughly outlined (in black) the flat areas of the county, something that students could easily do in a classroom exercise. If the opacity of the topography map is then set to zero, as in the last map posted here, the population density map is revealed, showing the correlation between settlement patterns and landforms.

But even on the higher resolution population density map, certain mysteries remain. Why, for example, would population density abruptly jump just to the north of Ventura County in an equally rugged section of Kern County? The answer here, again, is found in the degree of resolution. This map may seem to be finely divided, but in actuality in entails a large degree of spatial aggregation. Such aggregation is evident in the fact that the color categories often follow county boundaries exactly, which is almost never the case in regard to the actual distribution of the population. The main lesson here is that no map can ever be perfect unless it is made on a 1:1 scale, in which case it would also be perfectly useless.