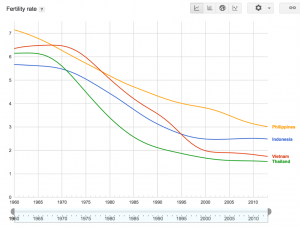 With 103 million inhabitants, the Philippines now ranks 12th on the list of countries by population. Owing to its moderately elevated birthrate, its population is still expanding at a brisk rate, outpacing those of its Southeast Asian neighbors. Steady population growth has been a feature of the country for some time. In 1903, the archipelago held fewer than eight million people, by 1940 its population had doubled, and by 1990 it had reached 60 million. 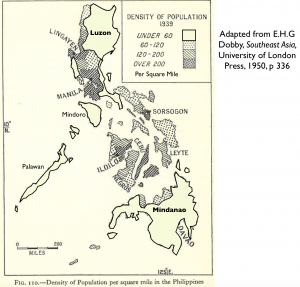 The distribution of the inhabitants of the Philippine has historically been decidedly uneven. Some areas have been thickly settled for centuries, but vast expanses long remained open. As can be seen in the map posted to the left, in 1939 relatively few people lived in Mindoro, Palawan, northern Luzon (with the exception of the narrow Ilocos Coast of the northwest), and Mindanao (with the exception of the north-central coast). Central Luzon and the central Visayas islands (Cebu, especially) were densely populated. 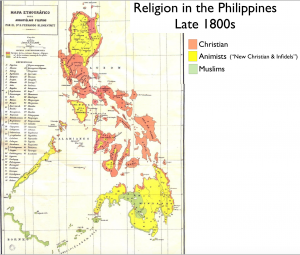 These same patterns are reflected in the map of religion from the late Spanish period. As can be seen, in the late 1800s most of northern Luzon, Mindoro, Palawan, and even Mindanao were inhabited primarily by animist tribal populations, most of which were small in numbers (although not all, see below). 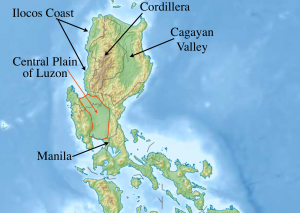 Some of the patterns seen on the 1939 Philippine population map were of long-standing, but others had emerged more recently. The island of Mindoro, for example, had been a lightly settled land since the early Spanish period, although prior to that it had been an important trading hub; evidently, struggles between the Spaniards and the Muslims of the south resulted in partial depopulation followed by the spread of malaria. The Central Plain of Luzon, now the agricultural heartland of the country, tells a different tale. Up to the mid and late 1800s, its central region was 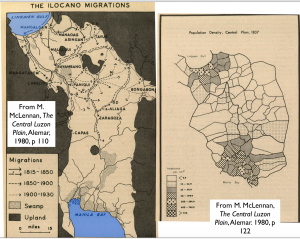 still heavily forested. As Marshal McLennan’s maps show, only its southern and northern margins were settled in 1837 by farming communities, those of the Kapampangan and Pangasinan peoples respectively. Starting at about that time, however, a major stream of migrants from the densely populated Ilocos Coast began to flow southward into the Central Plain. Somewhat later, Tagalog-speaking people began to move north into the same belt of fertile lowlands. By the mid-20th century, the formerly peripheral central zone of the Central Plain had been added to the core region of the Philippines. 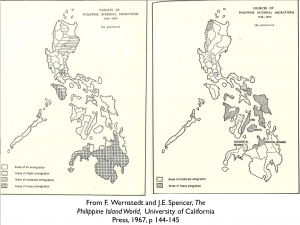 The Central Plain of Luzon was by no means the only region of the Philippines to see large-scale migrations in the early 1900s. Ilocanos from northwestern Luzon were also moving into the Cagayan Valley of northeastern Luzon and other places as well, including Hawaii and California (the vast majority of Filipino migrants to the United States in the first half of the 20th century were from the Ilocos region). Other densely settled areas, such Cebu, Bohol, and southeastern Panay in the Visayas Island, also sent out large numbers of migrants, most of whom settled in Mindanao. A seemingly odd feature on Spencer and Wernstedt’s map of internal Philippine migration from 1948 to 1960 is the high level of emigration from Samar in the eastern Visayas, as Samar has never been a densely populated island. But it was—and is—a very poor place, another factor that often encourages people to seek better opportunities elsewhere. 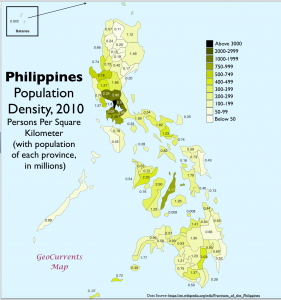 Owing to this long history of internal migration, the population distribution of the Philippines has become somewhat more even. Mindanao is no longer a frontier zone, and is now moderately populated by Philippine standards. To be sure, Palawan, Mindoro, and much of the Cordillera of northern Luzon still have relatively few inhabitants, but they also lack extensive lowlands that attract agricultural settlers. Central Luzon, on the other hand, has intensified its position as the demographic core of the country, a process closely associated with the explosive growth metro Manila, which now counts a population of almost 12 million. Today, the focus of Filipino migration is foreign rather than internal. An estimated 10.2 million persons born in the Philippines currently live abroad, representing around 10 percent of the country’s population. 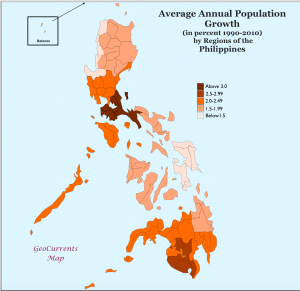 On the population density map of 2010 (above), the Ilocos Coast of northwestern Luzon appears as a zone of low to moderate population density. This standing seems surprising, as this area was noted for its dense settlement dating back to the time of the Spanish conquest in the late 1500s. The mapping here is a little bit deceiving, however, as the three provinces of the region all include rugged highlands as well as the narrow coastal plain. But it is true that the Ilocos Coast is no longer very demographically distinctive. Many Ilocanos, as we have seen, settled elsewhere, and in their homeland their fertility rate dropped, doing so sooner than almost all other areas of the country. As a result, the Ilocos region has seen relatively little population growth in recent decades.

In the Philippines, Ilocanos have a reputation for being hard working, thrifty, and somewhat stingy. As a result of this stereotype, they have been occasionally deemed the “Yankees of the Philippines.” To the extent that this common view is is accurate, the industriousness and frugality of the Ilocanos can be partially explained by the powerful theory of the Danish economist Ester Bosurup (1910-1999). In her classic anti-Malthusian work, The Conditions of Agricultural Growth: The Economics of Agrarian Change under Population Pressure, Boserup argued that population pressure, which the Ilocanos long faced, forces agricultural communities to engage in ever more frequent and intensive cropping cycles. As this process generates diminishing returns over time, people living under such conditions are forced to develop a strong work ethic. Although Boserup framed her theory in cultural terms, a number of geneticists now claim that there is a substantial genetic component to this process as well.* This notion is, of course, extraordinarily controversial, and I remain unconvinced although open-minded. But I am convinced that Boserup figured out one of the most important dynamics of human history, and I also think that she should occupy a much more prominent position in intellectual history than she does.

In 2012, The Inquirer, a major Philippine newspaper, reported on a modest test of the supposed frugality of the Ilocanos based on an examination of savings rates by region in the Philippines. As the report concluded:

Finally, Ilocanos have statistical proof to show that their detractors are wrong in calling them the most tightfisted Filipinos. A study by the National Statistical Coordination Board (NSCB) shows that Ilocanos now rank only sixth among the prolific savers in the country’s 17 regions. 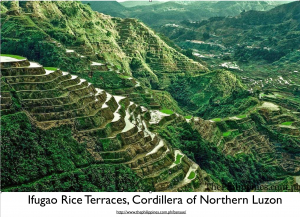 Intriguingly, the same study found that the Cagayan region of northeastern Luzon—populated almost entirely by Ilocanos—ranks as the second thriftiest region of the Philippines. The most savings-oriented Filipinos by a wide margin, however, are the highlanders of the Cordillera of Northern Luzon. The Inquirer article notes that most people of this region also speak Ilocano, but in actuality they do so as their second (or third, or fourth) language, and they certainly do not belong to the Ilocano ethnic group. But we can again turn to Boserup to gain insight on this finding. The ancestors of most Cordilleran groups migrated out of the lowlands into the highlands in order to escape Spanish taxes and to continue to worship their ancestors and practice their indigenous religion. There they had to undertake herculean labors to wrest a living from the rugged landscape, constructing some of the world’s most impressive agricultural terraces in the process. The Cordilleran people, in general, had to develop a strong work ethic to survive under such circumstances.

Owing in part to the highlanders’ predilection for intensive labor, and in part to their own prejudice against Hispanicized cultures, American administrators in the Philippines in the early 1900s often favored the mountaineers over the more civilized Filipino lowlanders. This attitude is explored by the historian Frank Jenista in his 1987 book White Apos: American Governors on the Cordillera Central. As Jenista frames the issue in his preface:

The purpose of this study is to examine the Philippine experience, the fascinating but hitherto untold story of the interaction between the American colonial authorities and the independent headhunting, terrace-building people of Luzon’s Gran Cordillera Central…. It focuses primarily on the province of Ifugao, for the American presence there was longest and best remembered. Despite the great cultural differences between the turn-of-the-century Ifugaos and Americans, the oral accounts which make up this story portray for us an intriguing relationship—a mutually satisfactory symbiosis due in large measure to an unexpected congruence of important cultural values…