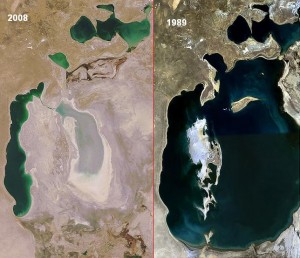 Conventional lists of the world’s largest lakes by area are often misleading. Most claim that the Aral Sea is one of the Earth’s most extensive bodies of inland water, some placing it in the fourth position, and others, including infoplease and factmonster, in sixth place. In actuality, the Aral Sea has virtually disappeared, and now is essentially a massive salt-flat, as can be seen in the paired images to the left. As a result, it should be deleted from such lists.

Second-place standing is also controversial. Most lists place Lake Superior in this position, including AboutGeography. The Wikipedia, however, has demoted Superior to third place, as it claims that Lake Michigan and Lake Huron are actually a single lake, the world’s second largest. From a strictly limnological point of view, it is difficult to argue with this assessment. 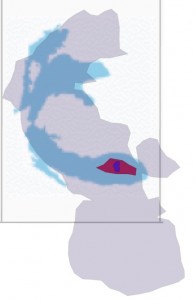 The Wikipedia list of the largest lakes conveniently includes small maps, made to scale, of the water-bodies in question. I have copied and traced out several of these images to construct a simple map overlay that shows relative sizes of a few noted lakes. The massive extent of the Caspian Sea (which is actually a lake) is evident, dwarfing the combined Michigan-Huron. Michigan-Huron, in turn, is shown to be massively larger that Kyrgyzstan’s Issyk-Kul (in maroon), the world’s second largest Alpine lake, which in turn is vastly large than Lake Tahoe (dark blue), widely viewed as sizable lake. (Lake Tahoe is actually too small to be on the Wikipedia list; as a result I have had to estimate its relative size here.)