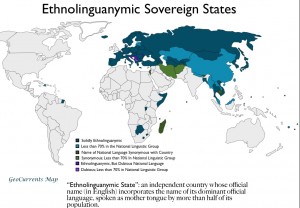 A recent GeoCurrents post noted that Afghanistan is not a nation-state, lacking the requisite solidarity. Yet the very name of the country might lead one to expect a relatively high level of cohesion derived from a common ethnic background. To coin a term, Afghanistan is an “ethnolinguanymic state”—that is, a state named after a dominant ethnic group that speaks a distinctive language and maintains a sense of common identity. Most ethnolinguanymic countries can make credible claims to nation-state status, founded on ethno-national solidarity. To be sure, such solidarity is routinely compromised by resistant minority groups, contested ethnic boundaries, and so on. But the case of Afghanistan is extreme. The identification between the Afghan people and the country of Afghanistan—“land of the Afghans”—is both tenuous and troubled.

Before delving into the Afghan situation in the next GeoCurrents posts, it seems worthwhile to spend some time on the admittedly idiosyncratic idea of the “ethnolinguanymic state.” Here is my working definition: an ethnolinguanymic state is an independent country whose official name (in English) incorporates the name of its dominant official language, spoken as mother tongue by more than half of its population. Some countries fit the definition quite well; in others the situation is more complicated, as the map indicates.  The patterns that appear here are perhaps best explained on a region-by-region basis.

As can be seen on the map, most European countries are unambiguously ethnolinguanymic. This is to be expected, considering the long European history of nationalism, nation-building, and ethnic cleansing. Yet not all countries in the region qualify. Switzerland and Belgium are multi-ethnic states without languages of their own.* Austria and Kosovo are more ethnically unified, yet they also lack their own languages (although many Americans, including the current president, often become confused on this score). Ireland and the UK are also out. Irish may be the first official language of the Republic of Ireland, but few speak it. English is the language of Britain, yet England has not been sovereign since it united with Scotland in 1707. A few other European states are of insecure ethnolinguanymic status. Fewer than seventy percent of the people of Estonia, for example, are Estonian-speaking ethnic Estonians; the same holds for Latvia. Almost all citizens of Luxembourg do speak Luxembourgish, which is also an official language of the country, but by linguistic criteria it is generally classified as a dialect rather than a language. The same is true of Moldovan, a dialect of Romanian. Serbian, Croatian, and Montenegrin were considered to form one language before the break-up of Yugoslavia, and they are still linked by a dialect continuum. Bosnia is in the same group, yet Bosnia is unmarked on the map, as fewer than half of its people speak “Bosnian.” By the same token, Macedonian can be taken to be a western Bulgarian dialect—and only about sixty-five percent of the people of Macedonia are Macedonian-speaking ethnic Macedonians.

The Western Hemisphere, by contrast, is virtually without ethnolinguanymic states, reflecting its deep heritage of European colonialism and the imposition of European languages (Spanish, Portuguese, French and English). The only exception is Haiti, where Haitian Creole, along with French, is an official language. The list would expand, of course, if other “creole-speaking” Caribbean countries were to elevate their own local patois to official status.

Like the Americas, Sub-Saharan Africa also has few ethnolinguanymic countries, again reflecting the history of European colonialism and boundary-making. Several indigenous African polities based on particular ethnic groups, however, did endure the colonial period to reemerge as sovereign states. Almost eighty percent of the people of Botswana, for example, speak Tswana (or Setswana), which has official status in the country along with English. By the same token, Swaziland is closely identified with the Swazi (or Swati or siSwati) language, just as Lesotho is indentified with Sotho (or Sesotho). The situation is a bit more complicated in Rwanda and Burundi, where two ethnic groups, Tutsi and Hutu, have historically shared a dialect continuum; the dialect deemed national in Rwanda is Kinyarwanada (or Rwandan) while that in Burundi is Kirundi (or Rundi). The situation is similarly complex in Madacascar, where one language (Malagasy) prevails, yet numerous ethnic groups, with distinctive dialects, divide the land. Somalia, on the other hand, is ethnolinguistically united around the Somali language, yet is a sovereign state only in theoretical terms.

A number of ambiguous situations are also encountered in Asia. Cambodia is an ethnolinguanymic country to the extent that Khmer is interchangeable with “Cambodian,” as it is generally taken to be. A similar situation obtains in Bhutan (Dzongkha =Bhutanese) and the Maldives (Dhivehi=Maldivian). It is more of a stretch, however, to regard Hebrew as synonymous with “Israeli,” and as a result I remain uncertain as to how Israel should be classified. China is also a difficult case; “Chinese” is actually a family of related spoken languages (deemed dialects) that share a written but not an oral basis. “Standard Chinese” (Mandarin, or Putonghua), to be sure, is a single language, albeit one spoken by less than seventy percent of the people of China as their mother tongue. Other Asian countries are coded to show the presence of large minority groups speaking non-national languages. Only about half the people of Nepal speak Nepali as their mother tongue, just as only about half the people of Malaysia claim Malay (Malaysian) as their first language. For Burma and Kazakhstan, the comparable figures are closer to two-thirds. The Philippines and Indonesia are excluded because fewer than half of their people speak Filipino and Indonesian, respectively, as their mother tongues. Iran is trickier, as it is an ethnolinguanymic country only to the extent that Persia is considered synonymous with Iran, and Farsi is reckoned synonymous with Persian. And even so, only about half the people of Iran speak Farsi/Persian as their first language.

But it is Afghanistan where the situation is most difficult to parse out, as we shall see in the next GeoCurrents post.

*Although one could argue that Swiss German and Flemish do qualify.