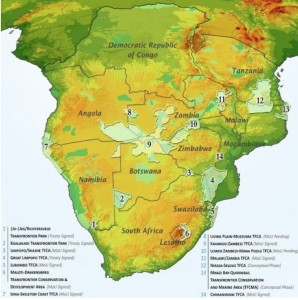 Over the past century, a number of “international peace parks” have been established, designed both to demonstrate amity between neighboring countries and to facilitate the preservation of wildlife, habitat, and natural beauty. The first such “transboundary protected area,” as peace parks are more prosaically labeled, was inaugurated by Sweden and Norway in 1914, an inauspicious year that nonetheless marked 100 years of concord between the two countries. In 1932, the United States and Canada created two such trans-border parks: the International Peace Garden in Manitoba and North Dakota, and Waterton-Glacier International Peace Park in Alberta and Montana. Over the years, several other border-spanning protected areas have been carved out, but the idea has been slow to catch on. Only a handful of such parks existed at the turn of the millennium.

In southern Africa, however, the movement to establish transboundary protected areas has recently taken off, thanks largely to the efforts of the Peace Parks Foundation. Established in 1997, the foundation emerged through the patronage of three powerful, elderly men: Nelson Mandela, then president of South Africa; Bernhard of Lippe-Biesterfeld, prince-consort of the Netherlands (and co-founder of the World Wide Fund for Nature and the Bilderberg Group); and Anton Rupert, an Afrikaner billionaire businessman and conservationist. Based in Stellenbosch, South Africa, the foundation has overseen the designation of several transboundary protected areas, as can be seen on the map. The best-known is probably the Great Limpopo Transfrontier Park, which, when completed, will link three national parks: South Africa’s Kruger, Mozambique’s Limpopo, and Zimbabwe’s Gonarezhou. The foundation’s most recent creation, the Kavango Zambezi Transfrontier Conservation Area (KAZA), is its most ambitious, located where, Angola, Botswana, Namibia, Zambia and Zimbabwe converge. As the Peace Park Foundation’s website explains: 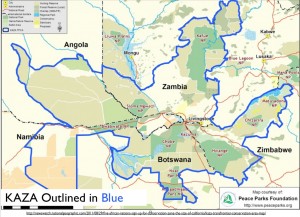 [KAZA] is set to become the world’s biggest conservation area and will eventually span an area of approximately 444,000 km2 (similar in size to Sweden). It will include 36 national parks, game reserves, community conservancies and game management areas. Most notably, the area will include the Caprivi Strip, Chobe National Park, the Okavango Delta … and the Victoria Falls (a World Heritage Site and one of the Seven Natural Wonders of the World). Kavango Zambezi promises to be southern Africa’s premier tourist destination…

Southern Africa is an appropriate place for the establishment of international peace parks. A generation ago, it was one of the most war-torn parts of the world, beset with seemingly intractable and often bloody conflicts almost everywhere but Botswana. Today it is a relatively peaceful place, noted for the cooperation of its countries through the Southern African Development Community (SADC). Although tensions persist both within and among southern African countries, the region as a whole has made tremendous strides in reducing conflict. Such amicable international relations make possible the development of large trans-frontier conservation areas.

Environmental factors in southern Africa further encourage the formation of border-spanning conservation zones. As it happens, most of the region’s premier wildlife havens are located near or along international borders. This correlation is most evident in the geography of elephant survival, a good indicator of intact ecosystems. As can be seen in the map to the left, the large tracts of wild land that support viable elephant populations in southern Africa are largely found across or near boundaries between countries. In this context, successful wildlife management requires international cooperation. Rebuilding wildlife numbers decimated in earlier periods of warfare also demands transboundary planning and implementation. Prolonged struggles in Mozambique and especially Angola devastated the fauna of both countries; Angola’s elephants were all but exterminated during its civil war. At the same time, successful conservation efforts in South Africa and Botswana have allowed excess elephant populations there, threatening national parks with partial deforestation. The international peace parks initiative facilitates the transfer of elephants from over-populated to under-populated areas, promising the restoration of balanced ecosystems over a broad area. 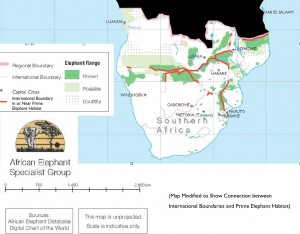 One of the largest areas of prime elephant habitat in the world is found along the borders of Botswana, Namibia, Angola, Zambia, and Zimbabwe—precisely the zone designated for protection in the KAZA initiative. In fact, the Peace Parks Foundation estimates that it contains “the largest contiguous population of the African elephant (approximately 250 000) on the continent.” Yet as the map of elephant distribution indicates, herds within the boundaries of the KAZA conservation area are not fully contiguous; a substantial gap exists between the main area and a smaller zone to the north in Zambia’s Kafue National Park. One of the primary goals of the Peace Parks Foundation is to establish linkages between different sites of wildlife concentration within the KAZA zone, allowing elephants and other animals to reestablish their migratory pathways.

Elephant preservation can be a tricky issue. Although the Southern African countries want viable wild elephant populations, they are mindful of the animals’ potentially destructive powers. Rampaging pachyderms can wreak havoc on farms, threatening the food security of a poor region. In early September 2011, for example, “a herd of stray elephants suspected to be from Botswana descended on the 50-hectare Shashe irrigation scheme [in Zimbabwe], destroy[ing] crops and fencing,” and leading to pronounced local anger. Given such risks, successful elephant management usually entails the construction of solid, electrified fences. Officials in charge of Zimbabwe’s Shashe project are now “looking for help to connect electricity to the 11km fence that was donated by the Peace Parks Foundation to protect the irrigation scheme.” Less expensive methods of elephant control are also being investigated by local researchers, including “using chili in various ways, such as embedding it in grease that was rubbed into ropes.”

Zambia in particular has much to gain from the KAZA project. Although it has numerous attractions, the country has not lived up to its tourism potential. The Zambian government plans to address the situation, hoping to increase its annual number of tourist arrivals from 900,000 at present to 1.5 million by 2015. Successful implementation of the transfrontier conservation scheme would go a long way toward making that goal achievable. But much work remains to be done. Zambia’s existing national parks have only been afforded partial protection, and neither wildlife management nor tourist facilities have received much attention. The country’s transportation system is notoriously challenged as well. Yet the Zambian government is currently being lauded for its economic reforms, which have supported solid growth in recent years. Optimism about the future of the copper-rich country is increasing.

If Zambia is to take full advantage of its eco-tourism potential, it will need to pay careful attention to its elephants. Leaders of the Zambian Wildlife Authority (ZAWA) fully recognize that many tourists want to see these large beasts. As the Zambia Post reported in June 2011, quoting a local wildlife official, “Last week, two elephants were killed in Lower Zambezi; this is unacceptable. That’s why ZAWA needs strong support from the government because our tourism is wildlife based.” Yet in some parts of the country, tourists do not have to go out of their way to see elephants.  As the managers of a tourist lodge in South Luangwa National Park discovered, building a hotel along an elephant migration route can bring interesting results. As captured in this YouTube video, elephants stroll right through the lobby of the Mfuwe Lodge between October and December of every year, on their way to a grove of wild mangos.