Future Atlas has an interesting new post on a campaign for the recognition of South Sudan—one that petitions not a government but rather Facebook to acknowledge the new country. The same post also discusses the problematic nature of the U.S. Postal Service’s “drop down” geographical menu, which includes such obscure places as the tiny Spanish exclave of Peñón de Vélez de la Gomera, yet excludes the West Bank and the Gaza Strip. 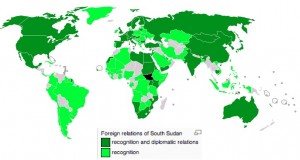 In regard to the international position of South Sudan, it is notable that many countries are not given official recognition. I am not surprised by the withholding of recognition by the Venezuelan-led ALBA block in Latin America, but I am perplexed by the fact that such countries as Thailand, Malaysia, and Georgia are in the same situation. It is also notable that Sudan was actually the first country to grant recognition, followed later on the same day by Egypt, Kenya, and Germany. The U.S., along with many other countries, gave recognition a day later. Several non-official countries, including Transnistria, have officially recognized the new state as well.