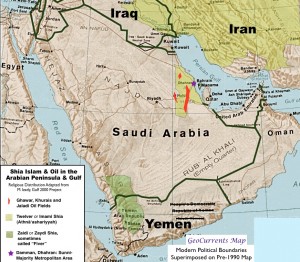 After the United States accused Iran of hatching an elaborate and ill-conceived plot to assassinate the Saudi Arabian ambassador to the United States, a number of commentators expressed incredulity, some wondering why the Saudi diplomat would be so targeted. The most common response to such questioning was to outline the history of Saudi-Iranian regional rivalry and to stress the mutual antipathy between the Shia (Shiite) Islam dominant in Iran and the harsh Wahhabi version of Sunni Islam dominant in Saudi Arabia. Deeper analyses delve into Saudi Arabia’s recent support for the brutal crackdown on Shia protestors in nearby Bahrain, a small Shia-majority country ruled by a Saudi-aligned Sunni establishment. More comprehensive inquiry also highlights the unofficial Saudi response to Iran’s nuclear program, as revealed in diplomatic cables posted by WikiLeaks: “cut off the head of the snake!” King Abdullah repeatedly urged the United States, hoping for US military strikes against Iranian nuclear facilities.

Less often mentioned is the Saudi fear of Shia insurrection in its own territory, which the Riyadh government links to potential Iranian subversion. Although Saudi Arabia officially estimates its Shiite population at around five percent, informed sources peg it closer to twelve percent. Most Saudi Arabian Shiites, moreover, live in the eastern region of the country near the Gulf—a relatively poor part of the country that contains the major share of its oil resources. Inexplicably, unrest in this area tends to be overlooked by the US media. Rioting in the town of Awwamiya in early October, 2011, for example, was almost entirely ignored—as was the Saudi government’s reprisal. The fact that the Shia-inspired Houthi rebellion of northern Yemen, reportedly aided by Iran, also sets its sights on Shia communities across the border in southwestern Saudi Arabia is also routinely disregarded by the media. It is thus hardly surprising that the depth of Saudi-Iranian animosity continues to surprise many American observers.

The early October disturbances in Awwamiya arose after Saudi authorities arrested two elderly men in a bid to find and detain their sons, who were both wanted for organizing demonstrations in solidarity with the recent Shia protests in Bahrain. (More than twenty Saudi Shiite protestors had already been arrested, including two bloggers.) According to the Saudi news agency, the subsequent incident involved “assailants, some on motorcycles, us[ing] machine guns and Molotov cocktails” to attack authority figures. Fourteen persons were injured in the resulting melee, including eleven policemen. Saudi official immediately blamed the disturbance on “a foreign country.” An amusing understatement in one news report tells us that, “Stratfor, a private intelligence company in Texas, suggested the statement regarding foreign interference could be a reference to Iran.” Not surprisingly, the Saudi Arabian government vowed to suppress any further unrest in the region with “an iron first.”

An excellent assessment of the Shia situation in eastern Saudi Arabia, circa 2005, is found in the International Crisis Group’s Middle East Report N°45, “The Shiite Question in Saudi Arabia.” The report emphasizes the efforts of King Abdullah to reduce the disabilities long imposed on the Shia minority. It also details the deep discrimination that the community has faced, while showing that its situation could have been much worse: after the Saudi state conquered the eastern region in 1913, “The ikhwan [religiously impassioned tribal warriors] exerted considerable pressure on the future King, Abd al-Aziz, either to forcibly convert or kill [the Shiites]. His refusal led in part to the ikhwan‘s 1926 uprising, which the al-Saud ultimately crushed.”

Saudi Shiites began to agitate for greater rights in the wake of Iran’s 1979 Islamic Revolution, but their aspirations were crushed. Shia leaders subsequently urged their followers to work patiently with the country’s authorities to improve their situation. Many Sunni leaders, however, remain skeptical of such an accommodating stance. According to the report’s authors, “The belief remains strong among Sunnis that Shiites are merely biding their time, banking on external support — U.S. or other — to establish their own independent state. Such views regularly find their way to internet sites and chat rooms; some clerics have explicitly warned of a Shiite-U.S. connection.”

After the US-led invasion of Iraq in 2003, Saudi Shia leaders again pressed the government to relax religious restrictions and to establish a constitutional monarchy. The Saudi government responded by arresting the activists. When Abdullah gained the throne in 2005, however, some constraints on the Shia community were eliminated. Such cautious movements toward religious pluralism have not pleased all members of the country’s religious establishment. As recently as 1991, the report specifies, “a member of the Higher Council of Ulama, issued a fatwa designating Shiites as apostates and condoning their killing.” The Crisis Group’s document also notes that many Saudi radicals who fought in Iraq after the fall of Saddam Hussein did so precisely in order “to kill Shiites.” 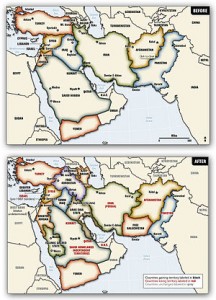 The Crisis Group’s report concludes by noting that “sectarian relations in Saudi Arabia are far from the boiling point, and the risk of imminent violent confrontation is low,” adding the opinion that “King Abdullah’s accession offers cautious reason for hope.” Such assessments now seem a bit premature. The widespread Saudi theory that the United States is abetting Shia unrest, however, seems unreasonable if not paranoid, considering the American fear of spreading Iranian influence in the region. The publication of Ralph Peters’ “Blood Borders” map of 2006, however, did seemingly lend credence to such conspiratorial thinking.