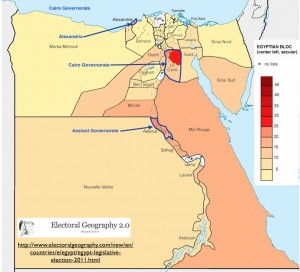 By Western standards, Cairo is a socially conservative and religiously devout metropolis. By Egyptian standards, however, it is a rather liberal place. Such a position is evident in the electoral maps of Egypt’s 2011 legislative election, recently put on-line by the invaluable website, Electoral Geography 2.0: Mapped Politics. As the first map posted here shows, the secular, center-left party, Egyptian Block, received a higher percentage of the vote in greater Cairo than elsewhere in the country. Egyptian Block also did relatively well in Alexandria, which was once considered a cosmopolitan city, and in the Assiout Governorate in the central Nile Valley, noted for having one of the largest concentrations of Coptic Christians in the country.  According to the Wikipedia, Egyptian Block, which received less than nine percent of the vote nationwide, hopes to:

“[E]stablish Egypt as a modern civil state in which science plays an important role, and to create equality and social justice in the country. The objectives of the Bloc also include to make a decent life possible for the poorer population, including education, health care and proper housing. It advocates a pluralistic, multiparty democracy and rejects religious, racial, and sexual discrimination.” 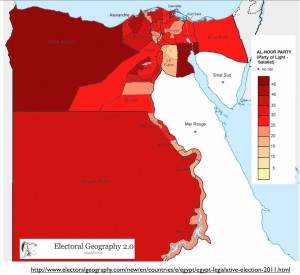 As the second map shows, the ultra-conservative Salafist party, Al-Nour, received relatively few votes in Cairo.  This party did very well, however, in the western desert, in the agricultural Fayoum Depression, and in large parts of the Nile Delta.