A New Political Bifurcation of India? 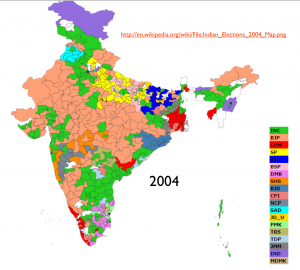 As mentioned in the previous GeoCurrents post, the 2014 Indian election reveals a intriguing division across the country, one separating the greater southeast, where regional parties generally prevailed, from the rest of the country, where the BJP generally triumphed. There are, of course, a number of exceptions to this pattern, such as Punjab and much of the far northeast. It is also too early to tell if this division will persist, as many of the patterns evident in the 2014 electoral map are relatively new. As recently as 2004, Andhra Pradesh in the southeast voted fairly solidly for the Indian National Congress (INC) rather than regional parties, whereas most districts in Uttar Pradesh and Bihar did not support either the BJP or the INC. 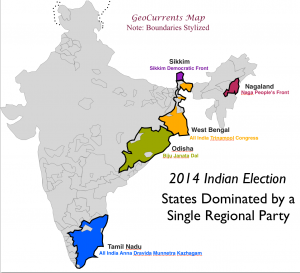 To illustrate the current regionalist voting pattern in India, I have prepared three maps. The first shows the states where a single regional party took a majority of constituencies. As can been seen, this category includes three large and two small 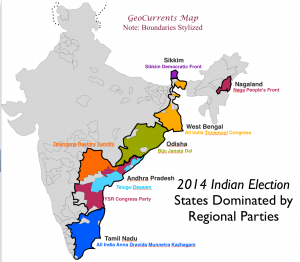 states, all located in eastern India. In making the second map, I considered as well states in which several regional parties together dominated the election. Here he only addition was Andhra Pradesh, which has recently been embroiled in the movement to create the new state of Telangana. This map best fits the southeast/northwest bifurcation of India mentioned at the beginning of the post. The final map includes as well states in which regional parties took a significant 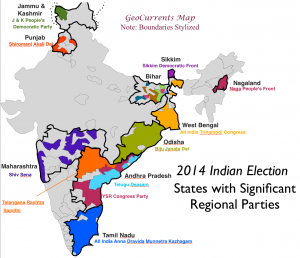 number of seats, but did not dominate the election. Here the simple split of India into two electoral regions is not so clearly evident. Two Indian state, Kerala and Bihar, exhibited particularly complex electoral patterns; they will be analyzed in a separate post. 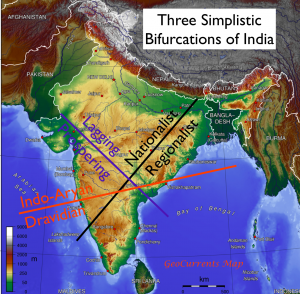 Finally, and at the risk of undue if not grotesque simplification, I would note that this electoral division runs against two other bifurcations of the country. In terms of economic and social development, India is vaguely split into a more prosperous and educated southwest and a poorer and less educated northeast (but with much of the far northwest fitting in much better with the southwest). Linguistically and perhaps in broader cultural terms as well, the main divide is between the Dravidian south and the Indo-Aryan north. The second-to-last map juxtaposes these three admittedly simplistic macro divisions of the country. Although I don’t put much credence in this map, I do find it intriguing that the lines converge in the vicinity of Hyderabad, a city and region that nicely exhibit the diverse economic, cultural, and 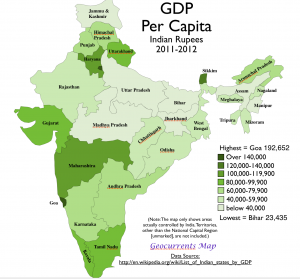