New Maps of India—and of the Indian Economy 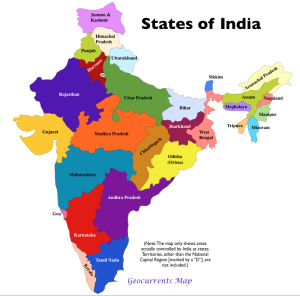 New political maps of India are now needed, as the state of Orissa has officially changed the English spelling of its name to “Odisha.” The new name, however, does not imply a change in pronunciation. As the Wikipedia notes, “… the name Orissa is closer to the actual Oriya pronunciation of the name, whereas Odisha is an intentionally archaising transcription.”

Although the change became official in November 2011, few maps of India show the now-official spelling. I have therefore made a new map of Indian states to reflect this change, which is posted here. As with many other GeoCurrents maps, it was constructed in Keynote (the Apple version of PowerPoint), and thus can easily be manipulated. Sometime next month, GeoCurrents will make this map, and a number of others, freely available in both Keynote and PowerPoint formats. Users can then easily change the color schemes, the place names, and so on, for all such maps. These maps can also be used for a variety of teaching exercises. In the second map posted here, for example, I have simply left the state names in place while scattering the state shapes; in Keynote, one can reassemble this map by dragging the shapes back to their proper places. Such a “jig-saw puzzle” approach to cartography can be an effective way for students to learn basic geography. 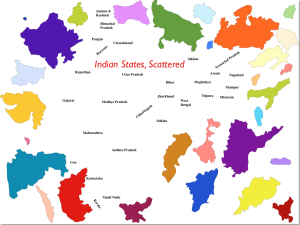 After making the political map of India, I decided that I might as well use it to illustrate recent socio-economic indicators for the country, up-dating an earlier (2010) GeoCurrents Atlas of Indian Development based on data readily available in Wikipedia. Today’s post includes two new maps of basic economic patterns; more maps will be forthcoming later in the week. 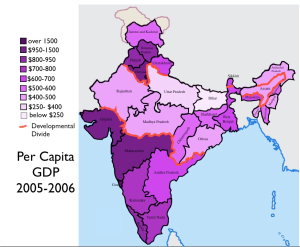 In the first map, the same “developmental divide” discussed in the 2010 GeoCurrents Atlas is still readily apparent. The north-central zone, including the Hindi-speaking heartland, still lags behind the rest of the country, and Bihar still stands in the bottom slot. India’s west and the south, meanwhile, still tend to score above the national average. This map does differ in several regards, however, from earlier depictions of Indian per capita GDP by state. Punjab, for example, is now only moderately above the national average (74,606 rupees per person in Punjab, versus 61,564 for India as a whole); when I first began teaching world geography in the late 1980s, Punjab was well above the national average. Punjab’s lagging position is probably related to the fact that its economy is still heavily agricultural. Substantial economic gains, on the other hand, have been made in such states as Tamil Nadu in the far 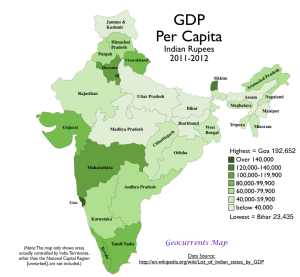 south and Sikkim and Arunachal Pradesh in the northeast. As we shall see in later posts, Tamil Nadu’s advances in social development have been even more striking. The relatively high levels of economic output in the Himalayan states of Himachal Pradesh and Uttarkhand are also noteworthy, as these states are similar in many regard to neighboring Nepal, which is noted for its extremely low level of economic output. (The CIA World Factbook pegs Nepal’s per capita GDP at US $1,300, as opposed to US $3,900 for India as a whole.)

The patterns seen on the next map, which shows the expansion of state-level Gross Domestic Product from 2005 to 2011, are less familiar. Here we can see that deeply impoverished Bihar has actually been experiencing rapid growth in recent years, easily besting neighboring poor states and even out-performing the southern states that contain most of India’s major high-tech centers. Whether Bihar’s remarkable turn-around can be sustained, of course, remains to be seen. Certainly the state’s continued low ranking in regard to social indicators (to be examined later in the week) does not inspire much confidence.

As can also be seen on this map, western India’s industrial states of Gujarat and Maharashtra continue to forge ahead. This pattern may even be intensifying; preliminary reports for 2011 show Gujarat as having achieved a remarkable 20.79 percent rate of economic growth for the year (2011 figures for Maharashtra are not yet available). Gujarat’s rapid economic growth has political significance at the national level, as the state’s Chief Minister, Narendra Modi, is now seeking higher office. Modi first gained national attention as an arch Hindu-nationalist accused of complicity in deadly anti-Muslim rioting in 2002. In recent years, he has toned down his Hindutva rhetoric, and is instead basing his campaign on economic issues. By all accounts, Modi is utterly devoted to enhancing his state’s economic growth. Critics contend, however, that Gujarat has not exhibited the same level of progress on the social front. 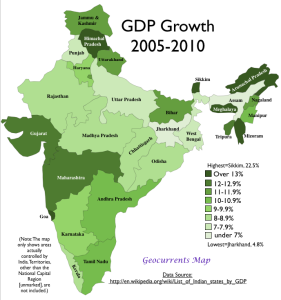 India’s most rapid economic growth in recent years, however, has occurred in several of its small, mountainous states of the far north. Some of the economic figures for these areas stagger the imagination. Sikkim, for example, supposedly saw a 48.21 percent expansion of its GDP in 2010 alone. Is such a rate of growth even possible? The Wikipedia article on the state credits tourism development, particularly that related to casinos and other forms of gambling, although it also mentions road-building, specifically the opening of Nathu La pass in July 2006, which connects India to Tibet. I suspect, however, that dam-building and electricity export to the rest on India are also major factors. Certainly Arunachal Pradesh in the far northeast, which China claims under the name “South Tibet,” has seen an explosion of hydroelectricity development in recent years. Many more dams are also slated for constructing here and elsewhere in the mountainous parts of India. Environmental opposition, however, is mounting, and some significant dam projects have recently been cancelled. In 2012, for example, Sikkim announced that it was scrapping plans for four new hydropower projects on the Teesta River. Considering India’s growing thirst for power, and the fact that it is burning ever-larger quantities of coal, such hydro projects are perhaps best viewed as environmentally ambiguous.