Industry, Insurgency, and Illumination in India 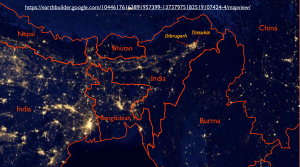 The “nightlight” map of Burma posted in the previous GeoCurrents article reveals an interesting contrast with northeastern India. Although India’s far northeastern region is generally considered one of the least developed and most insurgency beset parts of the country, it is well illuminated when contrasted with neighboring Burma. To highlight this contrast, I have taken a detail from Google’s Earthbuilder “Earth at Night 2012” world map and added national boundaries (at approximate locations). 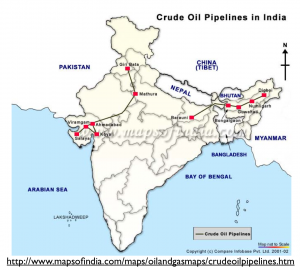 The most surprising feature of this map, to my eyes, is the bright cluster of lights in eastern Assam, not far from India’s northeastern extremity. As it turns out, this area contains the substantial cities of Dibrugarh (population 186,000) and Tinsukia (population 108,000), both of which are major industrial centers. According to the Wikipedia, Dibrugarh is “presently one of the 10 richest revenue 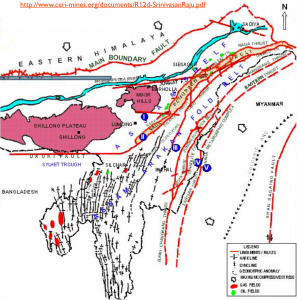 districts of India.” Industrialization here is based largely on local oilfields, which were the first to be exploited in India. Some reports indicate the presence of shale oil in the vicinity, which could result in enhanced production though fracking, although such a scenario does not seem likely in the near-term The center of oil production is the town of Digboi, located in the same general splotch of light. The Wikipedia description of the town provides its own form of illumination:

With a significant number of British professionals working for Assam Oil Company until the decade following independence of India, Digboi had a well-developed infrastructure and a number of bungalows unique to the town. It has eighteen holes golf course as part of the Digboi Club. It has guest houses and tourist residential apartments laid on Italian architectural plan to promote tourism in upper Assam.

“‘Dig boy, dig’, shouted the Canadian engineer, Mr. W. L. Lake, at his men as they watched elephants emerging out of the dense forest with oil stains on their feet]” This is possibly the most distilled – though fanciful – version of the legend explaining the siting and naming of Digboi. 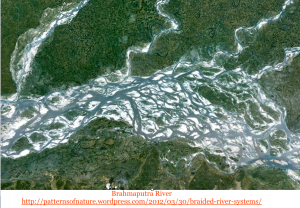 Wikipedia articles on the region and its cities make much of the Dibrugarh Airport and its new “state-of-the-art and integrated terminal.” Infrastructural development is evidently a major issue in this remote corner of India. Other discussions focus on the potential use of the Brahmaputra River for shipping, although the obstacles here are considerable. The Wikipedia article on Assam frames this matter in rather understated terms:

The Brahmaputra suitable for navigation does not possess sufficient infrastructure for international trade and success of such a navigable trade route will be dependent on proper channel maintenance and diplomatic and trade relationships with Bangladesh.

The Brahmaputra has a gargantuan flow, but it is also a classic example of a braided river, with ever-shifting, rock- and gravel-choked channels. Maintaining shipping routes in such an environment would be quite a challenge, to say the least. 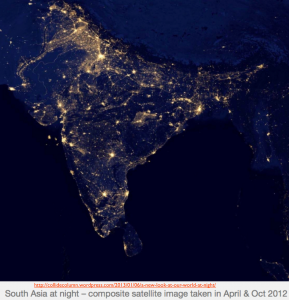 “Nightlight” maps of India as a whole are also interesting. What strikes my eye is the correlation between the large relatively non-illuminated areas in east-central India and the zones of Maoist (or Naxalite) insurgency, which is a huge security problem for India even though it receives little attention in the global media. A report in Eurasia Review suggests that a recent merger of several insurgent organizations 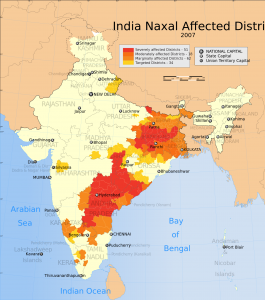 might result in an expansion of this rebellion to the south, potentially having a “significant impact for the Maoist movement in the tri-junction area of Kerala, Karnataka and Tamil Nadu.” This area, not surprisingly, is another dark zone on the nighttime map of India.