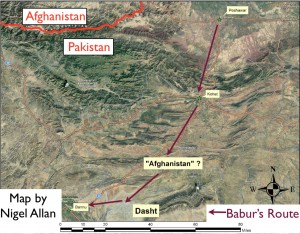 “Afghanistan” is an oddly constructed place name. It is usually said to be a Persian word meaning “land of the Pashtuns.” The widely used suffix “stan” is Persian for “place of” or “land of,” cognate with the English “stead” (as in “homestead”) and ultimately with “stand.” “Afghan” is usually considered synonymous with “Pashtun.” From the Pashtun perspective, “Afghanistan” is an exonym, a geographical term of foreign origin. For Pashto-speakers to call their country “Afghanistan” would be a bit like Germans calling their country not Deutschland but Germany, or the Japanese calling theirs Japan instead of Nihon or Nippon. But Pashtun-speakers in Afghanistan, unlike German speakers in Germany, do not form the majority linguistic community. In Persian (or Dari), the country’s most widely used language, “Afghanistan” is native term, but one that refers to a different people and to some extant a different place. (In Pashto, the official name of the state is Da Afġānistān Islāmī Jomhoriyat, translated into English as “the Islamic Republic of Afghanistan”; in Persian it is Jomhūrī-ye Eslāmī-ye Afġānistān.)

The identification of “Afghan” with “Pashtun,” however, turns out to be a knotty issue. Geographer Nigel J. R. Allan of the University of Nevada at Reno has examined this subject in detail. The earliest use of “Afghanistan” that he has found is in the Baburnama of the early 1500s, the autobiographical story of Babur’s creation of the Mughul Dynasty of northern India. In this account, “Afghanistan” denotes a limited area south of Peshawar in what is now northwestern Pakistan. Subsequently, “Afghan” came to denote a handful of Pakhtun/Pashtun tribes living in and around the Vale of Peshawar. The designation was gradually generalized to cover all Pashtun people, but the idea lingers that the “real Afghans” are still those of Peshawar, arguably the most important Pashtun city (although the multi-ethnic metropolis of Karachi now has the largest Pashtun population). With the creation of the modern state of Afghanistan, “Afghan” was extended to cover all residents of the country, regardless of their language or ethnicity. Allan associates this usage with 19th century British imperial agents. As a place name, “Afghanistan” is thus both exonymic and geographically displaced, having originally denoted an area outside of the borders of the modern country of that name.

To be sure, Allan’s narrative would be challenged by a few Afghan nationalists, who see earlier versions of “Afghan” in historical place names such as “Abgan.” A few have gone so far as claim a geo-historical essence for the Afghans and their country. In 1969, Abdul Hai Habibi argued that, “The word Afghan … represents an indivisible unit under all historical, economic and social conditions in the heart of Asia … with a historical background of one thousand and seven hundred years.” Yet, as usually the case, such an insistently nationalistic interpretation twists the past in accordance with modern-day dreams of national unity. The result leans more toward wishful thinking than scholarly analysis.

Allan’s finds similar complexities with other ethnic designations used in Afghanistan. Most texts and maps divide the country into roughly a dozen ethnicities. As the Wikipedia puts it, “The ethnic groups of the country are as follow: Pashtun, Tajik, Hazara, Uzbek, Aimak, Turkmen, Baloch, Pashai, Nuristani, Arab, Brahui, Pamiri and some others.” The term “some others” indicates uncertainty, which is indeed warranted. Following the Ethnologue and Erwin Orywal, Allan discerns forty-five languages and fifty-five ethnic groups in Afghanistan. Several conventional groups turn out to be composite units composed of distinct peoples speaking separate languages; “Nuristani,” for example, encompasses five languages. “Tajik” is an especially a fraught category. It too is foreign, derived from the Turco-Mongol term for “non-Turk.” Although it has long been used by Persian speakers for self-designation, “Tajik” retained pejorative connotations until recent decades. The institutionalization of the term has been linked to the Soviet manipulation of ethnic categories in Central Asia. As Allan shows, most of the current ethnic designations of Afghanistan were imposed by outsiders on the basis of limited knowledge. The resulting scheme ignored the indigenous concept of manteqa, used to divide most of Afghanistan into ethno-geographical units. As the Wikipedia puts it, “In Afghanistan, the Tajiks … refer to themselves by the region, province, city, town, or village they are from; such as Badakhshi, Baghlani, Mazari, Panjsheri, Kabuli, Herati, Kohistani.”

As a term of self-designation, “Pashtun” stands on stronger grounds than “Tajik. “Pashtun identity tends to be pronounced, and is often a source of considerable pride. But the mere fact that this ethnic group spans the border challenges the national formations of both Afghanistan and Pakistan. Pakistan also signals a claim to Pashtun territory by way of the word “Afghan.” The “A” in “Pakistan”—an acronymic country-name—refers to “Afghania,” just as the “P” refers to Punjab, the “K” to Kashmir, and the “S” to Sindh. 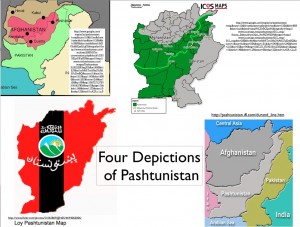 The Pashtun people themselves have on occasions hoped to break out of this geopolitical bind, proclaiming their own separate nationality and agitating for the creation of a new state. The proposed boundaries of an independent Pashtunistan, however, vary significantly, as can be seen in the maps posted to the left. In one version, Pashtunistan would be limited to the Pashto-speaking areas of both countries; in another it would add Pakistani Balochistan and a few other areas; in another it would encompass all of Afghanistan as well as the western half of Pakistan; and in yet another it would include only the western half of Pakistan. Although the idea of Pashtunistan is often considered dead, some maintain that the fear of its revival pushes policy in both Pakistan and Afghanistan. As stated recently in the anti-militarist World War Four Report, “Kabul and Islamabad both feel the need to appease Pashtun tribal leaders, fearing the specter of an independent ‘Pashtunistan’—which would take a critical chunk of both states’ territory, and widen the war yet further…”

As a final note, it has long seemed odd to me that Afghanistan is usually portrayed in the U.S. media as a Pashtun-dominated country, even though most of its residents belong to other ethnic groups, and even though Persian is more widespread and more prestigious than Pashto. Nigel Allan links this habit to U.S. diplomatic and military maneuvering in the region. In the 1950s and 1960s, almost all American developmental projects in Afghanistan focused on Pashtun areas. In the 1980s, the U.S. military embraced a “southern strategy” based on alliances with Pashtun militias aimed at expelling Soviet forces from the country. This Pashtun focus, Allan argues, stemmed in part from the British imperial designation of the Pashtun people as one of South Asia’s “martial races.” Whether the U.S. reliance on such Pashtun leaders as Hamid Karzai has been an effective strategy is a different matter altogether.