The 2014 Indian Election in Kerala and Bihar 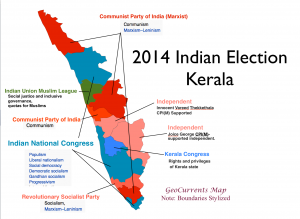 On the 2014 electoral map of India, two states stand out due to their division among many competing parties: Bihar in lower Ganges Valley and Kerala in the southwest. Intriguingly, these states represent the extremes of Indian social development. Bihar has long been noted as the poorest, least educated and most corrupt state in India, although it has made considerable—and surprising—progress in recent years. Kerala, on the other, stands at the top of the charts in terms of health, longevity, and education, although its economy has lagged a bit behind, and several other southern and western states are beginning to catch up on the social front.

In the 2014 election, the similarity between Kerala and Bihar is relatively superficial, not extending beyond geographical fragmentation. In Kerala, regional parties played a minor role; the state’s main distinction is that of being a stronghold minor national parties. The nationally triumphant BJP performed quite poorly in Kerala, taking only ten percent of the vote, while the Indian National Congress (INC) did much better than in most other parts of India, taking over 31 percent of the vote. In Bihar, on the other hand, the BJP overwhelmed Congress, 29.4 percent to 8.4 percent, with most of the rest of the vote going to regionalist parties. 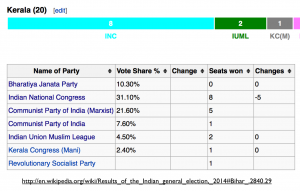 In Kerala, the election essentially pitted the center-left (Congress) against the far left. Much in contrast to most of the rest of the country, conservative parties took few votes in the state. Such results are typical for a state that has often been dubbed “Red Kerala.” At first glance, I assumed that the strength of the far left had declined in this election, as the Communist Party of India (Marxist) (CPI[M]) took only five Kerala constituencies while the Communist Party of India was victorious in only one. Closer analysis, however, revealed that three constituencies marked as “other” actually belong in the far-left category. Kollam supported, as it often does, the Revolutionary Socialist Party (RSP), a long-standing national group that has seen better days (it took only 0.3 percent of the vote nationwide). The RSP was weakened in Kerala in 2001 by the splitting off of the Revolutionary Socialist Party (Bolshevik), founded by the steadfast leftist politician Baby John; this new party, which bizarrely joined the conservative BJP-led National Democratic Alliance in March 2014, failed to take any seats. Two constituencies in Kerala supported independent candidates, but both are associated with the far left. The victor in Idukki was supported by the CPI[M], while Chalukudi voted in the locally famous comic actor Innocent Vareed Thekkethala, who is also associated with the CPI(M). Innocent’s victory was a shock to some, as Kerala, unlike many India states, had not previously elected celebrities to high positions. As reported in the Deccan Chronicle:

Sixty-five year old Innocent Vareed Thekkethala, popularly known as only Innocent, has made history in Kerala, by becoming the first actor to be get elected to Lok Sabha from state. The actor, a cancer survivor who contested as an Independent with support of the LDF, defeated his nearest rival P.C. Chacko of the Congress, a veteran in electoral battles, by 13,884 votes in Chalakkudy constituency.

The victory of Innocent, a school drop-out, has shocked UDF, which was so sure of Chacko’s win. The latter, a sitting MP in neighbouring Thrissur, had moved to Chalakkudy, considering it as a safe bastion of Congress.

The victory of Innocent was also surprising due to the fact that the constituency that he represents has a large Christian population, which tends to vote for the center-left. The most heavily Christian part of Kerala, Kottayam, supported the Kerala Congress Party, as it often does. This party broke away from the Indian National Congress Party in 1964; according to the Wikipedia, it “distinctively argues for the rights and privileges of Kerala state in a political spectrum which otherwise consists of state bodies of parties owing allegiance to various `high commands’ at the national level.” (The linkages between religion and voting patterns in Kerala is a interesting and important topic in its own right;  I will run a separate post on this topic next week.) 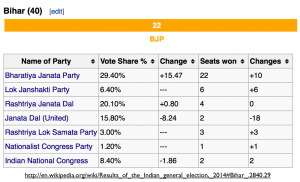 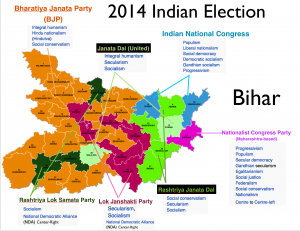 In regard to Bihar, the BJP took most of the constituencies in the west, whereas the east tended to support regionalist parties. Bihar’s regionalist parties derive most of their support from lower caste groups, and all proclaim their politics to be based on either socialism or social democracy. Such left ideological positions, however, have not prevented two of them from allying with the center-right BJP. Overall, as in neighboring Uttar Pradesh, the big story in Bihar is the fact that many voters abandoned caste- and region-based parties that emphasize redistribution in favor of the business-oriented and Hindu-nationalist BJP. By the same token, the biggest loss in Bihar was suffered by Janata Dal (United), a secularist party sometimes described as socialist and sometimes as center-left.

(Note: The “ideological descriptions” on the maps here are taken from the Wikipedia page of each particular party.)