What’s in a (Country) Name: The Georgia/Grúziya Controversy 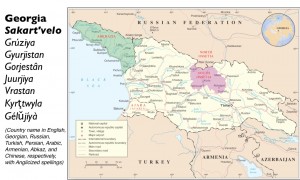 Names of countries in foreign languages (exonyms) often bear no relationship to the names of the same countries in their own official language or languages (endonyms). Such differences are generally accepted without complaint; the fact that English speakers refer to Deutschland as Germany and Nihon as Japan is not a problem for the governments or the people of those countries.

Occasionally, however, diplomats from a given country request that other governments change its name. In 1985, francophone Ivory Coast asked the international community to use its name in French only: Côte d’Ivoire. The request was honored by governments across the globe, although many English-language news agencies still use “Ivory Coast.” When East Timor gained independence in 2002, it asked to be called Timor-Leste, leste being the Tetum* word for “east.” (As “Timor” derives from a Malay word meaning “east,” Timor-Leste would translate into English as “East-East.”) Most countries followed suit, but Australia still uses “East Timor.” Such rejections of name-change requests usually reflect diplomatic tensions. Although Burma has insisted on being called Myanmar since 1989, Britain and the United States continue to call it Burma, in deference to Burma’s own democratic opposition. News agencies in the United States vary on this score. It will be interesting to see how this issue works out now that Burma is opening diplomatically and perhaps moving toward democratization.

Diplomatic requests for country name-changes do not necessarily reflect a desire to substitute indigenous names for those of foreign derivation. Both “Myanmar” and “Burma” are Burmese terms for the country—pronounced “Myanma” and “Bama”—the former being more formal, the latter more colloquial. In some cases, foreign governments are asked to switch from one exonym to another. Over the past several years, Georgia has been trying to convince a number of countries to call it “Georgia,” even though the Georgian name for the country is Sakart’velo.

As the map shows, Georgia is referred to by a number of distinctive names in different languages. The government of Georgia has no problems with most of these terms. That Armenians call the country Vrastan, for example, is not an issue; the President of Georgia recently congratulated the Georgia-based Armenian-language newspaper Vrastan for “strengthening friendly relations between the two neighbor nations.” But the Tblisi government does object to the Russian term Gruziya, and all names derived from it. In June 2011, the Georgian foreign ministry announced with satisfaction that South Korea had agreed to drop Gruzya in favor of “Georgia.” It also pledged to continue to pressure Japan, China, Bulgaria, Belarus, Croatia, Latvia, Lithuania, Estonia, Poland, the Czech Republic, Slovakia, Slovenia, Serbia, Hungary, Macedonia, and Ukraine to make the same change.

Several years earlier, in 2005, Georgia began lobbying Israel to drop Gruzia in favor of Georgia. The Israeli case was considered particularly important, as a Hebrew variant of “Georgia” had been widely used before the influx of immigrants from the former Soviet Union shifted the designation to the Russian-derived term.  Georgian diplomats argued that the switch to Gruzia could generate historical confusion in Israel, as “Georgian” has long been used to denote the Christian pilgrims and monks from Sakart’velo who once maintained prominent positions in the Holy Land. It was also suggested that Georgia objected to the “Gruzni jokes,” targeting Georgian Jews, that circulate widely in Israel. The Georgian ambassador in Tel Aviv, however, insisted that such crude humor is “an internal Israeli matter.”

The name Georgia itself has a complex and contested history. Various etymologies have been suggested, but most scholars now agree that it derives from “the Persian-Arabic designation of the Georgians—gurğ—which reached the Western European crusaders and pilgrims in the Holy Land who rendered the name as Georgia (also Jorgania, Giorginia, etc.).” The use of “Georgia,” in its various forms, seems to have been solidified in Western Europe through a false etymology; many people concluded that the name must have stemmed from Saint George, an exceedingly popular figure in Georgian Christianity. Supposedly, 365 Orthodox churches in the country are named after Saint George.

As a geography teacher in the United States, I would not mind the international community dropping “Georgia” altogether in favor of Sakart’velo. This is not a matter of preferring endonyns to exonyms; on the contrary, I usually use “Ivory Coast” rather than “Côte d’Ivoire,” as I see no reason to translate an English term into French. The problem with “Georgia” is rather the confusion generated by the existence of a U.S. state with that name. Internet searches of “Georgia” mostly return articles on the American state, making it cumbersome to conduct research on the country that shares its name. 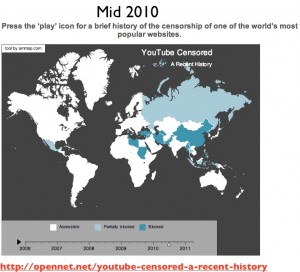 Georgian nationals often find this situation frustrating as well. But rather than changing the exonym of their country, some would prefer to rename American Georgia. In response to a YouTube video of Ray Charles singing “Georgia on My Mind” in early December 2011, one commentator opined, “americans rename your matherfucker state! when i want to look something about my country searching system show me your state! from GEORGIA (caucasus) with hate.” That comment, no surprise, elicited an outpouring of obscenity-laced vitriol from offended Americans. One responder, however, tried a more diplomatic approach: “This is an AMERICAN website! Georgian or russian language websites might cater more to your desires. Or maybe you might try searching for T’bilisi. Beautiful city that one! In fact both your country and our state are lovely places!”

But to what extent is YouTube an “American website?” The company, now a subsidiary of Google, is indeed headquartered in San Bruno, California. But the firm is

highly international. YouTube videos are readily accessible across most of the world, although a number of countries periodically put up total or partial blocks. Increasingly, YouTube is customized to various languages. According to the Wikipedia article on the company, “The interface of the website is available with localized versions in 34 countries,” employing “51 different language versions.” Georgian is not yet one of these languages, but there is a Facebook page for “YouTube in Georgia.”

*Tetum and Portuguese are the two official languages of Timor-Leste