Pleistocene Park: The Regeneration of the Mammoth Steppe? 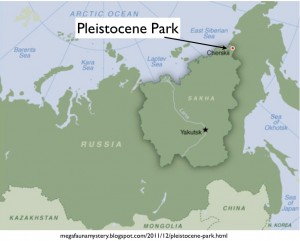 I must admit to having difficulty comprehending winter conditions in central and northern Siberia. From the U.S. perspective, Fairbanks, Alaska seems the epitome of cold, with an average January low temperature of -19 F (-28 C), but Fairbanks is positively balmy compared to Verkhoyansk, Siberia, where the average January high temperature is -44.9 F (-42.7 C). But what really staggers my imagination is the adaptation of mammalian life to such an environment. “How could anything live in such a place?” students often ask when I project the climate table for Verkhoyansk when lecturing on Siberia. Yes, how indeed.

Yet a wide array of large mammals thrive in central and northern Siberia, and do so without recourse to hibernation. Not only arctic creatures like reindeer and musk oxen, but even horses survive easily on natural fodder throughout the long and bitter winters. (Such horses, it is true, are of the cold-adapted Yakutian breed.) Bison also prosper in such an environment, and evidently camels can do so as well (Bactrian camels, not dromedaries). And according to Sergei Zimov, Director of Russia’s Northeast Science Station, lions, leopards, and even hyenas could survive and reproduce through most of Siberia, even in the particularly harsh northeast. As he notes, lions have long been kept outdoors all year with no apparent harm in the Novosibirsk zoo, where the average January low temperature is -4 F (-20 C).

Zimov is interested in mammalian adaptation to cold for a practical reason, as he would actually like to introduce such animals to northeastern Siberia. Although the prospect of releasing hyenas on the banks of the Kolyma River might seem to many an insane effort to engineer nature by spreading exotic species, Zimov would counter that he is rather seeking to restore nature and heal the wounds brought on by the Quaternary (or Pleistocene) extinction event, which took away much of the world’s megafauna (animals weighing more than 44 kg/100 lbs)—a catastrophe in which humans probably played a significant role.

Zimov’s “Pleistocene Park,” situated on the Kolyma River in the northeastern corner of the Sakha Republic (Yakutia) in Siberia, is already well underway. When the project was initiated in the environs of an arctic research station in the 1980s, the region’s large herbivores were mostly limited to reindeer, moose (or elk, as they are called in Europe), and, in the mountains, snow sheep. Under Zimov’s direction, Yakutian horses were successfully introduced in 1988. In 2010, locally extinct musk oxen were brought back from Wrangel Island to the north of Siberia, and in 2011 wisent (European bison) and elk (or wapiti, as they are called in Europe) were released as well. Extant species being considered for introduction to the park include the saiga antelope, the yak, the Bactrian camel, the Siberian roe deer, the Amur leopard, the Asiatic lion, the spotted hyena, and the Siberian tiger. Extinct animals that could conceivably be brought back into existence and then reintroduced are limited to the woolly rhinoceros and the woolly mammoth. Other extinct animals of the region, such as scimitar cats, have no close living relative—or frozen corpses—and are thus lost forever.

The Pleistocene Park proposal is deeply rooted in ecology, pedology (soil science) and climatology, as we shall see in the next post. The remainder to the current post examines its foundations in the geo-history of Siberia and the broader circum-polar realm. 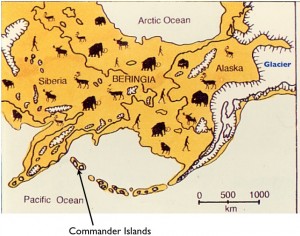 Driving the development of such a park is the idea that the ecosystems of Siberia, like those found in much of the rest of the world, are deeply out of kilter, thrown off their evolutionary trajectories by the loss of megafaunal diversity and keystone species. For millions of years, Siberia, like all other continental lands, had been the home of many large mammal species, which had evolved together along with the local vegetation. Over the ages, many individual species went extinct, but others emerged to replace them, thus maintaining high levels of diversity. The overall system proved resilient in the face of major climatic perturbations. Over the course of the Pleistocene epoch (2,588,000 to 11,700 years before present), cold glacial periods alternated with interglacial times like our own with little effect on wildlife beyond shifting their distributional patterns. During glacial periods, when massive icecaps formed over northern Europe and northern North America, Siberia remained largely ice-free. Although Siberia’s average annual temperatures were lower then than they are today, megafauna of various stripes continued to thrive in the region. During these cold, low-carbon-dioxide periods, sea level was much lower than it is today; as a result, Siberia and largely ice-free Alaska were connected by the exposed bed of the Bering Sea. The resulting landmass, Beringia, supported a substantial number of large mammals, the largest of which was the wooly mammoth. 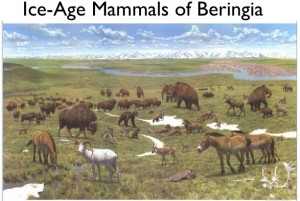 Although glacial and interglacial periods had alternated for more than a million years with little impact on fauna, the most recent change was a different matter altogether. When the continental ice caps once again began melting away some 11,700 years ago, a megafaunal catastrophe occurred. The disaster was world-wide, but it struck some area much harder than others: in North and South America, something on the order of 85 percent of all large mammals disappeared, but the extinction rate was lower in Eurasia and lower still in Africa. The reason why sub-Saharan Africa is so rich in wildlife today is the fact that it was largely spared from the Quaternary extinction event; throughout evolutionary history, Africa’s megafaunal endowment was similar to those of other large landmasses. Although Eurasia as a whole suffered much less damage than the Americas, the same cannot be said for its higher-latitude regions. Rhinoceroses and proboscideans (elephants and the like), for example, survived in southern Asia, but not in Siberia or Europe.

A common misconception about the extinct creatures of the Pleistocene is that they were somehow not really modern. In the popular imagination, woolly mammoths, woolly rhinos, and the giant ground sloths of the Americas (some of which were of elephantine bulk) were archaic beasts not fit for the modern world and its contemporary climates. This is not the case. In evolutionary terms, 11,700 years is but a moment. The human beings who lived at the time were anatomically the same as us, and the same is true of other mammals that survived the catastrophe. The climates in which cold-adapted species such as the woolly mammoth thrived, moreover, never disappeared. Instead they merely shifted into higher latitudinal belts as the world warmed, just as had happened in numerous other transitions from glacial to interglacial conditions.

The cause of the Quaternary extinction event has been hotly debated for decades. Many theories have been proposed, as surveyed in the comprehensive Wikipedia article on the subject. In the most general terms, two main camps have offered competing explanations, one based on climatic change and the other on human over-kill. Advocates of the of former school have long argued that new climates emerging with the Holocene transition some 11,700 years ago were not conducive to the survival of many large mammals. Greater seasonal disparities have often been regarded as particularly detrimental. In Siberia, for example, warmer summers led to the establishment of the taiga, or boreal forest, which provides poor forage for large herbivores. Also blamed were the severe climatic fluctuations that marked the transition period, which would have placed extreme stress on large animals. Climate-change theorists doubt that humans could have been responsible for the event, as they would have been too few in number. They also point to the fact that large-game-hunting peoples co-existed with large mammals for millennia in Europe and elsewhere without wiping them out.

Those who favor the overkill hypothesis point to the survival of woolly mammoths well into historical times on two unlikely locales: Wrangel Island off the northern coast of Siberia and Saint Paul Island in Alaska. E.O. Wilson’s powerful theory of island biogeography tells us that we should have expected the exact opposite: the larger the landmass, the more species should have been able to have survive. What made these two islands unique, however, was the fact that they were not reached by humans during the extinction period. When they were finally settled, mammoths disappeared. The same pattern pertains at the global scale. New Zealand and Madagascar suffered huge blows to their unique faunal assemblages (the former dominated by large, flightless birds) not at the end of the Pleistocene, but rather some 1,000-2,000 years ago, when they were finally reached by people. The last of the Quaternary extinctions arguably occurred in the late 1700s, shortly after Vitus Bering and his crew happened upon the Commander Islands, a previously unvisited archipelago between Kamchatka and the Aleutian Islands. Grazing the kelp forests in the sea around the islands were Steller’s Sea Cows, massive (8-10 metric tons) relatives of the manatee and dugong. Absurdly easy to hunt, Stellar’s sea cows had once ranged throughout the coastal waters of the northern Pacific, wherever kelp abounded. 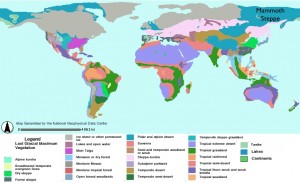 In regard to Siberia, Zimov’s work challenges some of the basic components of the climate-change perspective. Theorists in that camp often argue that modern Siberia is too humid to support the extensive grasslands on which woolly mammoths and their contemporaries grazed. As their habitat vanished due to climate change, the grazing herds necessarily disappeared as well. During glacial periods, conditions in Siberia were both colder and drier than they are now. As a result, sand dunes and dust-derived loess soils developed in many areas. Nutritious grasses grew well in the cool, semi-arid summers of glacial-period Siberia, supporting large herds of herbivores and the carnivores that preyed upon them. In the wetter post-glacial period, mosses and other non-vascular plants growing on waterlogged soils largely supplanted the grasses that had previously dominated the tundra zone. Such vegetation, however, has extremely low nutritive value, and hence supports little wildlife. Inland from the Arctic Ocean, moreover, the warmer summer temperatures of the post-glacial period allowed the formation of the vast boreal forest, or taiga, that today blankets much of Siberia. The mostly coniferous trees of the taiga also offer little food for large herbivores. As a result, it is often argued, the only large herbivores adapted to most modern Siberian environments are reindeer, which graze extensively on lichen, and moose, which browse on willows and other broad-leaved shrubs that persist in particular habitat zones.

According Sergei Zimov, the scenario outlined above has it all backward. As we shall see in the next post, he argues that the Siberian grassland, of “mammoth steppe,” vanished not because the climate changed, but rather because the mammoths and other large grazers that had maintained it disappeared. Bring back the megafauna, advocates of the Pleistocene Park argue, and you will simultaneously bring back the relatively productive steppe that characterized most of Siberia during the Pleistocene epoch.