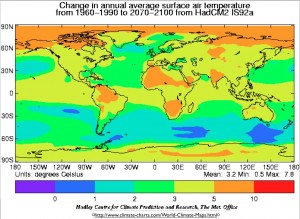 GeoCurrents has recently emphasized the forbidding cold of the Siberian winter, stressing the obstacles that such a climate presents for the development of the region. Unmentioned in these posts is the possibility that Siberia’s climate will significantly change over the coming decades due to global warming. If the predicted warming occurs, could the change prove beneficial for Siberia, and Russia more generally? Many Russians think so. Such optimism, however, might prove unwarranted, as climate change could also generate significant problems for the region.

Regardless of Russia’s potential gains from global warming, the country has incentives for downplaying the severity of the crisis. The Russian economy rests heavily on the export of fossil fuels, and if climate-change concerns result in a wholesale switch to renewable forms of energy—as unlikely as that might be—Russia would suffer a major blow. Any major restrictions of carbon dioxide output would also hamper the Russian economy. Although Russia’s carbon emissions are surpassed by those of China and the United States, they are growing rapidly, and some analysts suspect that Russia could be the top emitter by 2030. Not surprisingly, skeptical reports about climate change often receive prominent coverage in the Russian press. In 2010, Time Magazine quoted a Russian environmentalists who argued that, “Broadly speaking, the Russian position has always been that climate change is an invention of the West to try to bring Russia to its knees”. Such paranoid views of climatic change as hostile machinations of the West are not uncommonly held by the Russian public. More recently, a Voice of Russia article showcased the position of Nikolay Dobretsov, Chairman of the Earth Science United Academic Council, who contends that a 40-year cycle of cool and warm periods is currently driving the global climatic regime, and that a change to cooler times is imminent. As a result, Dobretsov argues, global warming is a non-issue.

Russian experts who accept the reality of global warming, moreover, often welcome it for the advantages that it could bring the country. In September 2003, Vladimir Putin noted that global warming would help Russians, “save on fur coats and other warm things.” Other Russian politicians have focused more on the damage that climate change could do to Russia’s geopolitical rivals. The ultranationalist Vladimir Zhirinovsky, for example, is reported to have “publicly pined for the day when global warming takes its toll on the West, gloating that London will be submerged by the Thames and “Britain will have to give freedom to Scotland and Wales and Northern Ireland.”

Possible economic benefits of a warmer world for Russia are spelled out in recent article by Serge Korepin. The displacement of the Siberian permafrost zone, which could retreat by more than 100 miles (161 km) by 2050, would facilitate the extraction of mineral resources. The reduction of the Arctic ice pack, moreover, would promote mining and drilling in offshore areas. By the same token, the retreat of the pack ice will ease maritime transportation in the far north, allowing the full realization of the long-envisaged Northeastern Passage, shortening shipping routes between the north Atlantic and the north Pacific. Actually, such changes are already occurring. As reported last year by the New York Times:

The Russians, by traveling near the coast, have been sailing the Northeast Passage for a century. They opened it to international shipping in 1991, after the breakup of the Soviet Union. But only recently have companies begun to find the route profitable, as the receding polar ice cap has opened paths farther offshore — allowing larger, modern ships with deeper drafts to make the trip, trimming days off the voyage and saving fuel. 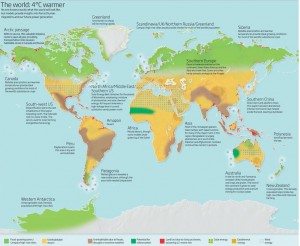 arming could also enhance Russian agriculture, says economist Svetlana Soboleva. Although drier conditions might damage farming in southern European Russia, warmer temperatures and longer growing seasons would be beneficial in the north and east, especially in Siberia. Governmental reports have already noted enhanced agricultural production in some parts of Russia due to warmer conditions. The general consensus of climate-change specialists is that farming will be enhanced in high-latitude belts—of which, Russia holds the lion’s share. Indeed, worst-case scenario maps, such as that posted to the left, show the world’s main food-production zones moving to Canada, Siberia, and northern European Russia. In such an eventuality, Siberia would actually have a large advantage over North America, as most of the soil of northern and central Canada was scrapped off by the continental glaciers during the Pleistocene “ice age” and then re-deposited in the fertile plains of the American Midwest. Siberia, in contrast, was spared extensive glaciation during the same period, and in some areas saw the development of fertile, wind-deposited loess soils.

Prediction of the complete transformation of global agricultural and settlement patterns due to climate change are highly speculative, as specific changes of both temperature and precipitation are impossible to forecast with any accuracy. In actuality, the map posted above (“The World, 4 C Warmer”) is an alarmist fantasy, depicting as it does the vast expansion of “uninhabitable deserts” across most of the tropics and subtropics, even though a warmer world would almost certainly be a wetter world, as higher temperatures enhance evaporation over the oceans. (Note as well that the densely populated western Antarctica portrayed on the map would only be possible after catastrophic Antarctic deglaciation, which would result in a sea-level rise much greater than what the map depicts.) 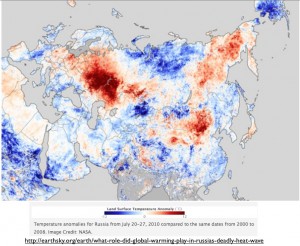 Even in the short-term, the local effects of global climate change defy prediction, thwarting the development of reliable scenarios for agricultural adjustment. If the main consequence for Russia is the lengthening of the growing season in Siberia, the agrarian ramifications for the country could well be positive. But many experts foresee major climate fluctuations, marked by extreme weather events, as the Earth warms, which could result in marked increases in droughts, heat waves, and even cold-snaps. For some, the brutal heat experienced in European Russia in the summer of 2010, which caused an estimated $15 billion in economic losses, seems a harbinger of things to come. Global-warming skeptics, not surprisingly, regard the heat wave of 2010 as merely an outlying natural event, unconnected with human-induced climate change. A recent scientific study argues for a middle position, suggesting that, “global warming set the stage for, but did not directly cause, the deadly heat wave.” But it is noteworthy that that the 2010 heat wave was not felt across Russia. While European Russia was baking, most of northwestern Siberia was cooler than usual.

Even if global warming was not the direct cause the 2010 drought and heat wave, it may still be influencing Russia’s climate. A recent report claims that Russia has experienced a more warming over the past 35 years than any other country: “In the last 35 years, the average temperature in Russia went up by 1.5 degrees, while the average figure across the world is 0.8 degrees.” Such warming is not evenly distributed. The most significant temperature changes have been registered in eastern Siberia, with south Chukotka and the Kamchatka region seeing increases, “1.5 to two times more than in the rest of the country.”

Many experts expect global warming to accelerate, in part due to processes underway in Siberia itself. The permafrost is melting over a vast territory of Western Siberia—the size of France and Germany combined—which could soon turn some 360,000 square miles of peat bogs into a watery landscape of shallow lakes, releasing billions of tons of methane, a potent greenhouse gas. Scientists are also concerned about the potential thawing of yedoma, or frozen loess deposits, in eastern Siberia. As the Wikipedia explains, “the amount of carbon trapped in this type of permafrost is much more prevalent than originally thought and may be about 500 Gt, that is almost 100 times the amount of carbon released into the air each year by the burning of fossil fuels.” 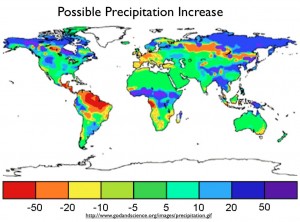 Concerns about permafrost melting are heightened by most global climate change models, which predict larger than average temperature increases in high-latitude areas. Different climate-change models, however, produce different results. Such differences are apparent in the two maps of predicted precipitation change posted here. Note that the first map forecasts reduced precipitation over most of western and southern Siberia, whereas the second shows enhanced precipitation over virtually the entire region. If the former predictions were to come to pass, agricultural gains that would seemingly be realized from warmer temperatures and a longer growing season could be cancelled by moisture deficiencies. 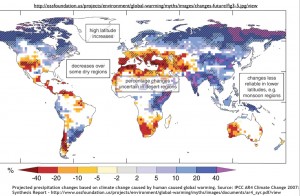 Another problem with the predicted positive consequences for Siberia’s agriculture concerns seasonal distribution of the overall warming. In many areas, warming has affected only winter temperatures, with temperatures during the growing season remaining stable or even declining. Russian scientists who examined trends in the “degree of continentality”—that is, the difference between average summer and average winter temperatures—showed that the Siberian climate in general has become less continental. Winters, in other words, have been growing milder more rapidly than summers have been growing warmer. For instance, the average summer temperature in Krasnoyarsk actually fell by 0.4 degrees between 1940 and 1990. In the far northeast, however, the opposite trend is observed: a widening of the seasonal gap over the period between 1950 and 2000.

Russia’s other potential gains from global warming could also be matched by losses. The thawing of permafrost, for example, could cause havoc with oil and gas pipelines, as well as with other industrial and residential structures. In cities such as Norilsk and Irkutsk, such gradual destruction of building foundations is already happening. The retreat of the Arctic pack ice also presents problems as well as opportunities. As the ocean becomes more accessible, it could also become more insecure. As a result, Russia is contemplating stationing more troops into the far north. A 2011 article quotes Anton Vasilev, special ambassador for Russia’s Ministry of Foreign Affairs, as arguing that “Our northern border used to be closed because of ice and a severe climate. But the ice is going away we cannot leave 20,000 kilometres unwatched. We can’t leave ourselves in a position where we are undefended.”

The warming of Siberia’s climate may even harm the health of Siberia’s residents. The expected increase in weather variability, marked by more frequent anomalies and extreme events, could compromise the human immune response, especially among Siberian indigenous peoples. While it may not appear dangerous to inhabitants of warmer climes, studies show that a rise of summer temperature to 29° C and above causes increased mortality among peoples of the Far North. In addition to autoimmune disorders, other health consequences of global warming in Siberia would include a rise in enterovirus-caused infections, gastroenteritis, parasitical diseases, botulism, and rabies.  Already in the last five years reports have been appearing of infection-spreading ticks and mites emerging earlier in the season in south Siberian regions of Omsk and Novosibirsk.

Such health concerns, however, are unlikely to sway public opinion in Russia. In all likelihood, the Russian government will continue to simultaneously deny and welcome global warming.