The Centrality of the Caucasus 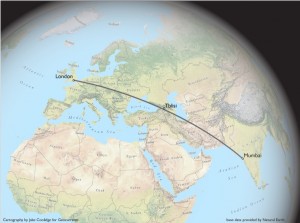 The current series began by asking a seemingly banal question, “Where Is the Caucasus?” Although the region is easy to locate on a world map, its geographical categorization is tricky, as the Caucasus straddles the conventional divide between Europe and Asia and can plausibly be placed in different regions of the world. The initial post concluded by suggesting that the Caucasus might be regarded as a world region in its own right.

After inspecting the Caucasus for the past month, I am more convinced than ever that it merits such a designation. Despite its compact size, the Caucasus contains as much human diversity as most recognized world regions. Its role in world history has been profound—and deeply underrated. When we append the Caucasus to some other part of the world, its distinctiveness tends to fade away, leaving a vague peripheral zone of rugged landscapes and obscure peoples. In the process, the region’s larger significance is lost. 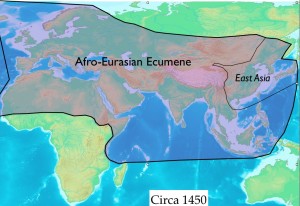 The seeming obscurity of the Caucasus is an artifact of our inherited and rarely questioned schemes of global division. Newer ideas about the geographical structures of the pre-industrial world, however, can help reposition this historically important region. In the traditional Western imagination, the Caucasus is situated between Europe and Asia: the two major divisions, along with Africa, of the Eastern Hemisphere. World historians posit instead an “Afro-Eurasian ecumene” of loosely linked civilizations that encompassed most of the so-called Old World. Within this mega-region, the primary divide is increasingly seen not as that separating Europe from Asia, but rather that marking off East Asia from everywhere else. Physical geography played a role here; the mountains between India and China are so formidable that travelers between them often detoured thousands of miles through the Silk Roads of Central Asia. In demographic terms, Europe and India were the twin anchors of this rump ecumene (without East Asia), constituting its major population centers. 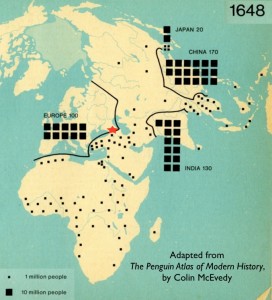 To the extent that the area encompassing Europe, the Middle East, and the Indian Peninsula formed a historically coherent sphere of interaction, the Caucasus served as its fulcrum. That centrality is evident on the first map posted here, made by  Jake Coolidge for GeoCurrents, which shows the most direct line, or great circle route, between London and Bombay (Mumbai). Such a pivotal location was an advantage, if a minor one, for the Armenian merchants* who helped knit together the Afro-Eurasian ecumenical societies.

*Although Tbilisi, situated near the mid-point of the London-Mumbai axis, is a Georgian city, its population was predominately Armenian until the second half of the nineteenth century.