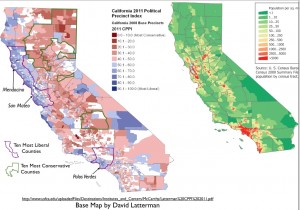 Recent GeoCurrents posts on Northern California have emphasized the political divide between the left-leaning coast and the right-leaning interior. Such an analysis is reinforced by an incisive new report, David Latterman’s “The California Political Precinct Index,” published by the Leo T. McCarthy Center for Public Service and the Common Good at the University of San Francisco. Based on returns from a number of California state ballot initiatives, Latterman has constructed a precinct-level map of political orientation, arrayed along an axis from the “most liberal” (in blue) to the “most conservative” (in red) areas. The map I have posted here overlays county-level data on Latterman’s precinct-based map, showing California’s ten most conservative and ten most liberal counties (as identified in the same report).

As can be seen, the gap between the northern coast and interior is profound; the northern half of California encompasses nine of the state’s ten most liberal counties and nine of its ten most conservative counties. From Big Sur on the central coast to southern Humboldt County in the far north, it is difficult to find conservative precincts within fifty miles of the ocean. Significantly, the wealthiest districts in the San Francisco Bay Area are depicted in blue. In southern California this pattern is not as pronounced. Although many rich areas of the southland—Malibu, Beverly Hills—are mapped as voting with the left, the tony Palos Verdes Peninsula is decidedly red.

The few liberal precincts in the conservative interior are instructive. In the San Joaquin Valley, the larger cities—Stockton, Modesto, and Fresno especially—are clearly marked blue. Other liberal San Joaquin precincts are linked to heavily Hispanic populations. In the more conservative Sacramento Valley, the college towns of Chico and Davis, along with the state capital of Sacramento, appear as liberal enclaves. Other left-leaning precincts in the interior are characterized by low population density and abundant natural amenities, which have attracted left-leaning outdoors enthusiasts. Examples include the Lake Tahoe area, Alpine County, eastern Mariposa County, and parts of Inyo County.

The most conservative portions of the state are also intriguing. In southern California, southwestern Riverside County is marked as quite far to the right; this area witnessed a major suburban housing boom just before the crash of 2008. Further north, a strip of western Kern County—the eleventh most conservative county in the state—is mapped in deep red. This area encompasses Midway-Sunset, the largest oilfield in California and the third largest in the United States. Some of the ranching areas in far northeastern California, especially in Lassen County, are shown as equally conservative.

Latterman’s geographical dissection of California’s left/right divide at the precinct level goes about as far as it can. More locally specific data is not available, and further analysis will eventually be frustrated by the limitations imposed by a simple, one-dimensional, left/right spectrum. Many political views do cluster along such an axis, but by no means all. Different regions are “liberal,” “conservative,” or “moderate” in very different ways. Mendocino and San Mateo counties may look the same on Latterman’s map, but they are not. Mendocino has proportionally many more radical leftists and left-libertarians—and many more people on the far right as well—than San Mateo County, a staid, well-off, pro-business, technologically oriented suburban expanse.

In some respects, moreover, the wealthy suburbs of the San Francisco Bay Area are not as liberal as they seem from Latterman’s map or from the underlying data. This should perhaps come as no surprise; these same areas were reliably Republican voting as recently as the 1970s, and they contain many members of “the one percent.” Rich places historically incline to the right, as they still do in many parts of the United States. But because the general cultural tenor of the Bay Area is so strongly liberal, conservative viewpoints often remain hidden. Frequently they are not even recognized as such, in something of a mass case of political blindness. The people of Palo Alto and environs, the heart of Silicon Valley, view themselves as strongly environmentalist, deeply concerned about inequalities of wealth, and committed to the national triumph of the Democratic Party; in actuality, the policies pursued by their local governments are deeply anti-environmental, serve to exacerbate the gap between the rich and the poor, and help push the United States as a whole in a more conservative direction.

Substantiating these controversial if not outrageous claims will take up the next few posts, the final ones in the current series on northern California.