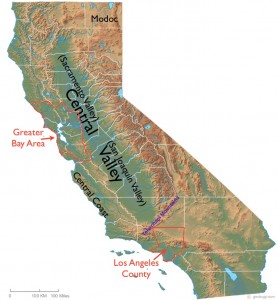 With thirty-eight million people spread over an area of 163,696 square miles (423,970 km2) and an economy that would rank between the eighth and eleventh largest in the world if it were an independent country, California makes an unwieldy state. Its different regions are so distinctive culturally, economically, and politically that numerous attempts have been made to divide California into two or more states. As a previous GeoCurrents post noted, earlier divisional movements wanted to split northern from southern California, whereas current-day campaigns want to hive off the more conservative interior from the coastal counties. “Coastal California,” however, is far from unified, as its north/south divide, focused on the metropolitan rivalry between Los Angeles and San Francisco, remains profound. 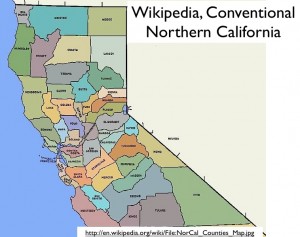 Despite the political gap between the coast and the interior, the binary north/south scheme remains the most popular way to divide the state. “Central California” appears on many corporate and governmental maps, but it barely exists in the public consciousness. Hardly anyone would describe himself or herself as being from “Central California,” although many would specify the “Central Valley” or the “Central Coast.” Yet as fundamental as it is, the dividing line between the north and the south remains uncertain. The older scheme, which I learned in Elementary School, splits the state at the Tehachapi Mountains, giving northern California the entire Central Valley, including the culturally southern* city of Bakersfield at the far end of the San Joaquin Valley. The Wikipedia’s map of “Conventional Northern California,” which splits along county lines, gives only the southern extremity of the Central Valley to southern California. Many observers, however, put the boundary further to the north. 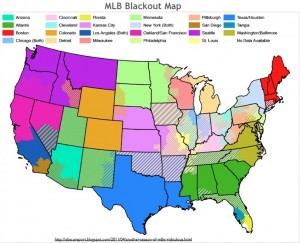 One intriguing way to assess such regional affiliation is through “fansheds,” areas in which most people cheer for a certain professional sports team, and hence identify with the city in which it is located. Major League Baseball has produced a map that approximates such cheering zones, based on “blackout zones” in which the television coverage of home teams is limited. Here the state’s north/south divide is approximately halfway down the San Joaquin Valley. Note here the northward extension of southern California to the east of the Sierra Nevada Mountains, placing sparsely populated Inyo and Mono counties in the south. 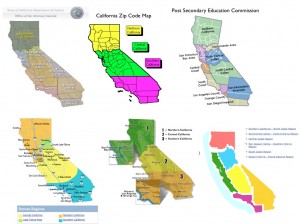 Yet the terms “northern California” and “southern California” do not always refer to these primary divisions of the state. When California is divided into multiple regions, the same names can be attached to much smaller areas. As the collection of maps posted here shows, “northern 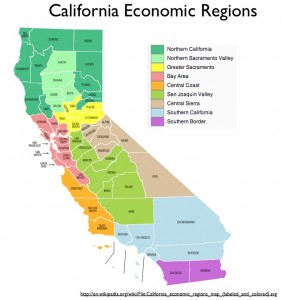 California” sometimes means far northern California, in one form or another. One semi-official scheme delineates nine economic regions, one of which is called “northern California.” This particular region, however, is poorly conceived.  Mendocino County, its economy based on marijuana, wine, and high-end tourism, has precious little in common with Modoc County in the far northeast. Economically, culturally, and politically, Modoc is more closely linked to northern Nevada and eastern Oregon than it is to the rest of California, let alone Mendocino County. (The fitting motto of conservative Modoc County is, “Where the West Still Lives.”) 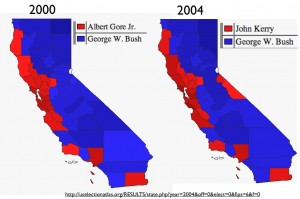 One way to more rigorously regionalize the state is through voting behavior. Although California is now considered hopeless for Republican presidential candidates, large areas of the state remain Republican strongholds. While the division here is sometimes depicted as one of the Democratic coast versus the Republican interior, the actual pattern is rather more complicated. The 2000 and 2004 presidential elections make particularly good examples, as that of 2008 skewed unusually far to the Democratic side. As these maps show, southern California still trends Republican at the county level, with the notable exceptions of highly Hispanic Imperial County, populous and multi-ethnic Los Angeles County, and up-scale Santa Barbara County. In Northern California, on the other hand, the coast/interior divide is stark; all coastal and Bay Area counties voted for the Democratic candidates in these elections except Del Norte in the extreme north, and almost all interior counties voted for Republican candidates, many by substantial margins. The only two Central Valley counties to lean left were Sacramento, site of the state capital, and Yolo, home of the University of California at Davis. (The city of Davis has been evocatively called “Berkeley in Ohio,” referencing the flat topography, hot summers, and the relatively conservative attitudes found in neighboring communities.) 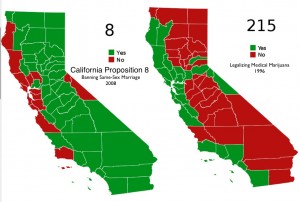 Similar patterns are found on other electoral maps. Consider, for example, the returns from Proposition 8, which rejected same-sex marriage in 2008 (the results of which were recently overturned in court). Here a few northwestern counties drop from the liberal camp, including heavily Hispanic San Benito and Solano, the latter noted for a recent anti-gay backlash movement in the working-class city of Vallejo. Proposition 215, which legalized medicinal marijuana in 1996, had much broader support, virtually sweeping the coastal counties, north and south. The defeated initiative that would have fully legalized marijuana in 2009, on the other hand, gained the majority of votes only in the Bay Area and the Central Coast, along with sparsely populated Alpine (population 1,175) and Mono (population 14,202) counties in the east. Note that even Mendocino County rejected this initiative. But it did so, many argue, not from opposition to marijuana, but rather from fear that cannabis legalization would generate too much competition and thus undermine the local economy. San Luis Obispo County on the Central Coast is the real oddity here, as this usually conservative-voting county rejected medical marijuana in 1996 but supported full legalization in 2009. 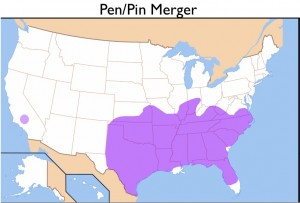 *Bakersfield’s, and, more generally, Kern County’s, “southern” affiliation links the region not so much to southern California as to the American South (which is actually the southeastern quadrant of the country). Oil-rich Kern County was settled heavily by migrants from Oklahoma and Arkansas in the 1930s, it has some Southern linguistic markers (such as pronouncing pen the same as pin, see map), and its popular musical tradition—“the Bakersfield sound”—is Southern as well.