NPR’s Incomplete Story on “Trimmigants” in the California Marijuana Industry 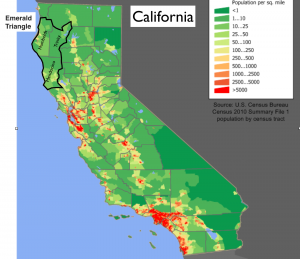 On December 4, 2014, National Public Radio (NPR) ran an interesting story on a severely underreported matter: international seasonal labor migration to the “Golden Triangle” of marijuana cultivation in northwestern California. This report—“With Harvest Season, ‘Trimmigrants’ Flock To California’s Pot Capital”*—captured many of the more intriguing and important aspects of the phenomenon. But it also missed some significant things and made a few doubtful assertions. This post seeks to provide a more comprehensive picture.

Before proceeding, it is necessary to outline my own sources of information. Although the evidence in most GeoCurrents posts derives from a variety of published materials and on-line sources, this one relies entirely on oral interviews. Since my earliest years, I have spent a considerable amount of time recreating in Mendocino County, arguably California’s cannabis core (neighboring Humboldt County, however, would contest that claim). After a close friend moved to the county, I began to meet his neighbors and attend local events. I have been to road-association meetings, informal community gatherings, and even assemblies devoted to dealing with troublesome neighbors. The last-mentioned gathering led to a particularly riveting experience: an afternoon in a Mendocino County courtroom considering requests for restraining orders. As the case that I was interested in came last, I got to witness six compelling micro-dramas, several of which involved marijuana cultivation in one way or another. The tragedy, pathos, and unintended comedy of the proceedings surpassed anything that I have seen on film or in television shows.

I have devoted time to exploring Mendocino County because I find it an environmentally gorgeous and culturally captivating place. Eventually, although probably not until retirement, I plan to write a historical geography of the county, focusing on the history of land-use. I have not yet dipped into the local archives, but I have been informally gathering oral histories from talkative residents for some time.

After listening to the NPR story mentioned above, I arranged to meet first with a few marijuana growers and then with a group of itinerant workers to discuss the issues faced by “trimmigrants.” The growers interviewed all run small-scale operations that are as legal as possible. They cultivate under medical license, remain within the county’s 25-plant limit, and sell their product to official medical dispensaries. All of them found the NPR report to be insightful but incomplete and somewhat exaggerated. But my sample of growers, it is necessary to note, is both highly limited and confined to one small area. As a result, this post should not necessarily be taken as representative of the larger enterprise.

According to the NPR story, European trimmers are favored by most growers over American youths, who are often disparaged as “hippie kids.” The reporter interviewed a young man named Fermin who had been unsuccessfully seeking work for a month and was forced to “dumpster dive” for food. My sources were not surprised by Fermin’s plight, but they nonetheless expressed doubt that American trimmers per se face discrimination. In their operations, local youths are the first to be hired and the last to be let off. Partly this is due to basic community ties, but it is also a matter of these youngsters’ deep experience with a demanding job. One local girl joked about “being born with a pair of scissors in my hand,” and others told of not being allowed to watch television or listen to music as children until their daily allotments had been trimmed. But people like Fermin, scruffy outsiders with Pit Bull Terriers, would only be hired in a case of desperation.

Fermin’s problems extend beyond his appearance, choice of pet, and lack of local contacts to encompass his gender. Men, everyone agreed, are disfavored when it comes to the delicate job of trimming. Although they agreed that they were being “politically incorrect,” the growers insisted that women have, on average, much better fine-motor skills than men, as well as more patience with a grindingly monotonous task that often goes on for more than twelve hours a day. Trimmers are usually paid by the pound, as noted by NPR, and as a result the slower-working men make much less money than the generally faster women. But quality also factors in, as buds must be carefully manicured but not trimmed down so much as to cut into the weight, and workers must remain vigilant in searching for mold, the growers’ worst nightmare. Relatively few men, I was informed, can pass the test of the more demanding artisanal cannabis cultivators. When young men do find work, it is more often in harvesting, hanging buds, and covering unharvested plants with plastic sheeting before rain events. There is much less demand, however, for this kind of labor than there is for trimming.

Of the seasonal workers I interviewed, four were locals (three female, one male) and four were Spaniards (all female). Three of the Spaniards came from the same part of Spain, an area well known for both its high-end tourism and countercultural flair. Some of them have been coming to the Emerald Triangle for years, but one was on her first trip, having been tearfully forced to leave a 14-year-old daughter at home. They all talked about the difficulty of finding employment in Spain, and all maintained that a two-month stint in California could allow them to subsist for the rest of the year back home. Getting work for the full two months, however, did not always prove easy, as small-scale growers only hire trimming crews for a week or two. As a result, they had all traveled back and forth among different “grows” in Humboldt, Trinity, and Mendocino counties. In finding such work, all were indebted to another person hailing from the same region of Spain. This woman’s outsized personality and immense knowledge of cannabis processing, gained in Morocco and India as well as in Spain and the United States, allows her to serve as a kind of informal, international go-between. When issues arose among the workers and between the workers and their employers, she would be called, in Spain, for consultation.

Other aspects of the NPR story generated skepticism among the growers. They scoffed at the assertion of one cultivator who claims to harvest eight pounds per plant, and then laughed when he said that the plants in question are of the OG Kush variety. Eight-pound plants are legendary: everyone has heard of them, but no one has actually seen one. And while OG Kush is indeed the cultivar of the year, in hot demand by the metropolitan cognoscenti, but it is a notoriously poor producer, usually yielding fewer than two pounds per plant. In the end, my sources could not decide whether the grower interviewed by NPR was greatly exaggerating the yield of his plants, or whether they themselves needed to do something to improve their own cultivation.

The NPR story ended, as these things often do, on a doleful note:

But as laws around the country change — making marijuana legal — analysts say the pay scale is bound to go down, making trimming more like any other low-paid farmwork. And, like farmwork across the country, marijuana production is already becoming mechanized — gradually making trimmigrants a thing of the past. 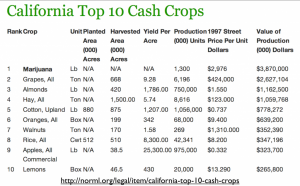 These assertions, not surprisingly, generated much discussion. The first elicited general agreement: the prospect of full legalization makes growers nervous. The idea that mechanization is replacing manual trimming, however, evoked only scoffing. Attempts have been made, they told me, but all have failed. One grower even purchased a $14,000 automatic trimmer a few years ago, a machine designed to process hops (Humulus [hops] and Cannabis are very closely related plants). But the buds had to be pre-trimmed before going into the mechanism, as it cannot handle large stems, and then post-trimmed after coming out, as medical-marijuana dispensaries are exacting customers. More problematic, the machine had to be shut down and cleaned several times an hour, as the resinous buds would quickly gum-up the cutting blades. After a few days of operation, the machine was put into storage and has remained there ever since.

But as alluded to above, threats to marijuana cultivation across the Emerald Triangle are very real. Prices are steadily dropping, and some growers are now having a difficult time making ends meet. The real problem is that of competition from indoor cultivation, which is coming to dominate the market. Indoor buds are more uniform than those grown under the sun, generally have less mold, and are usually more potent as well. As a result, they command a steep price premium, and many medical dispensaries are no longer even willing to sell outdoor pot.

The growers that I interviewed are both dumbfounded and heartbroken by this development, as indoor cannabis cultivation is one of the most environmentally destructive forms of agriculture imaginable, whereas their own “sun grown” product is environmentally benign. They cannot understand why the marijuana market, of all things, would disdain organic farming and instead embrace a hyper-technological, eco-hostile form of production. Regional and generational antipathies also come into play. My interviewees are mostly in their 50s and 60s, and they strongly identify with the neo-rural cultural values of the Emerald Triangle; their indoor competitors, in contrast, are mostly in their 20s and 30s, and are largely based in major metropolitan areas. “We invented this business in the 1970s,” my sources argued, “and we did so under extraordinarily adverse conditions, and now these environmentally unconscionable kids, these corporate wannabe LA pot-snobs, are undermining our livelihoods! How can that be?”

Farmers, in my experience, almost always complain, about both the weather and their agricultural markets, whether they grow wheat, corn, or cannabis. But as we shall see in subsequent posts coming next week, the environmental arguments made by Mendocino County pot growers are difficult to deny.

*The text version of this article at the NPR website is abbreviated; listen to the audio version for the full story.

Note that the location for the story has been keyed to Mendocino’s county seat, Ukiah, rather than to the actual places of cultivation and processing alluded to in the post.