Exclusivity and Anti-Environmentalism in Palo Alto and Vicinity

The previous GeoCurrents post argued that opponents of urban intensification in wealthy suburban communities such as Palo Alto, California are motivated in part by their desire to protect their property values.  Commentator Nick Baldo took issue with that assessment, arguing that increased density actually has the opposite effect. In retrospect, I think that Baldo is correct. Environmentally responsible “smart growth” in suburban communities such as Palo Alto would likely result in enhanced property valuation in the long term, although certain projects might cause short-term price declines in specific areas.

I stressed concerns about property value because the topic is ubiquitous in Palo Alto conversations. Long-term homeowners have seen the value of their equity explode, and many are obsessed with the issue, and fearful that their gains could somehow evaporate. Potential threats are carefully scrutinized.

Concerns about property values in the Palo Alto Area can quickly trump all environmental considerations, even in the most self-consciously green communities. I write from personal experience here, based on my dealings with the homeowners association in my own community. I live on the Stanford University campus in a 140-unit condominium complex. This neighborhood, composed entirely of faculty and high-level staff members and their families, leans strongly to the left, and its environmentalist proclivities are immediately evident in election returns, casual conversations, and bumper-sticker slogans. But property value considerations loom large, even though residents own only their own structures, and not the underlying land. (Actually, much of the equity in the buildings themselves belongs to Stanford University, which maintains a variety of complex housing subsidies for faculty members.) 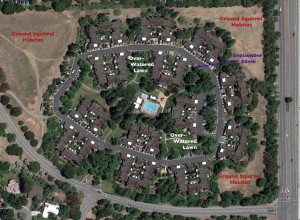 One might think that such a community would pursue environmentally responsible policies, but it does not. I first encountered local anti-environmentalism here when addressing an irrigation issue. The condominiums in question are arranged in a circle around a small, manicured park area. Although the Stanford campus has a semi-arid Mediterranean climate, with rainless summers and only about 18 inches (460 mm) of precipitation during the rest of the year, the plantings in the common area are adapted to a much more humid climate, and thus require constant irrigation in the summer. Unfortunately, they are habitually over-watered. In late summer and early autumn, when longer nights and cooler temperatures reduce evapotranspiration, the lawns ooze water for weeks, with so much excess run-off that the gutters turn green with algae. Yet when I mentioned this needless waste of resources to the homeowners’ board, I received only withering stares and a terse comment: “we tried reducing irrigation once and several brown spots appeared in the lawn, threatening our property values.” Several years later, California experienced a three-year drought, which resulted in pressure on the community to reduce its water consumption. At that point I suggested replanting some of the lawn area with drought-adapted Mediterranean vegetation; from the reactions of the board members, one might have thought that I was proposing to put in tiger-pits and rolls of barbed wire. (The drought in question was followed by two wet winters, during which time pressure for water conservation vanished; California, however, is now experiencing another dry winter. 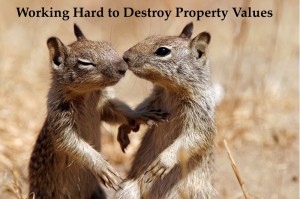 Management of the area outside of the circle of condominiums has also been environmentally hostile. This lightly tended zone is covered with annual grasses and supports a few native oak trees. It is little used, except by dog-walkers and stargazers, and it forms a small zone of relatively natural habitat in an otherwise suburban landscape. A few years ago, this area was colonized by a small contingent of ground squirrels. Ground squirrels are ubiquitous in the rural areas of the Stanford Campus, and most people consider them to be harmless and rather endearing little creatures. Ecologically, ground squirrels are significant in providing abundant food for hawks, kites, foxes, and other small predators. And sure enough, as the number of ground squirrels around the complex expanded, the number of hawks in the neighborhood visibly increased.  The homeowners association, however, became worried that the presence of so many rodents could threaten property values, and therefore ordered the extermination of the entire colony by way of poisoned bait. The local human community, despite its strong environmentalist credentials, voiced few objections.

Considering such reactions, it seems to me that the fear of reduced property valuation encourages anti-environmental positions among ostensibly green and prosperous suburbanites of Palo Alto and neighboring communities. But other factors are no doubt more significant. One is the desire for exclusivity. The larger the number of people who are able to live in Palo Alto, the less exclusive the precious community becomes, threatening the self-regard, if not the property values, of its elite residents.

At first glance, Palo Alto does not seem like a highly exclusive place. The very idea of a “gated community” is considered anathema here, the sort of thing that one finds in Republican-voting areas of the country. By the same token, local public schools are adored and generously supported. Unlike most high-income areas, Palo Alto sends relatively few of its children to private schools.

If one digs slightly below the surface, however, different attitudes are revealed. To substantiate this claim, I can offer only a single anecdote, related to me several years ago by an acquaintance. Perhaps the story is exaggerated, and I have no way to verify its claims. All that I can say is that the tale “rang true” at the time, and that the person who related it seems entirely trustworthy.

The person in question was at the time a stay-at-home mother with three school-aged children. Her husband was a teacher in the Palo Alto Unified School District, but on a single teacher’s salary they could not even dream of living in the community. The school district, however, allows the offspring of its teachers to attend Palo Alto schools regardless of where they live. As a result, the woman enrolled her children in an elementary school in one of the city’s most exclusive neighborhoods. Everything was working out well until some of the other parents discovered that this new family did not reside locally and thus, in their eyes, had no rights to the local school. Not only was the woman shunned, but her children were harassed on the playground with taunts such as, “my mommy told me that I can’t play with you because you don’t belong here.” Several months later, she pulled her children out of the school. She dubbed those who had driven her out the “Shallow Altos.” 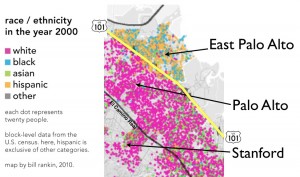 Palo Alto schools, it is important to note, have acquitted such an exclusive ambiance by virtue of an accident of political geography. Adjacent to the community but separated from it by an eight-lane freeway is the city of East Palo Alto. East Palo Alto is a relatively poor place; until recently its population was mostly African-American, and now it is heavily Hispanic. Crime rates in East Palo Alto are high, gangs are a problem, and test scores are low. If East Palo Alto had been placed within the Palo Alto School District, many if not most Palo Alto parents would have enrolled their children in private schools. But East Palo Alto lies in San Mateo Country, whereas Palo Alto is in Santa Clara County, and it was thus integrated into a different public school district.

Feelings of exclusivity, I am convinced, inform the debates over urban intensification in Palo Alto. More important, however, are matters of mere convenience. Many established residents simply do not want increased competition for parking spaces, additional cars clogging the roads, or longer waits at their favorite restaurants. For the sake of such convenience, they are willing to sacrifice not only sound environmental policy, but also economic sanity, as we shall see in the next post.