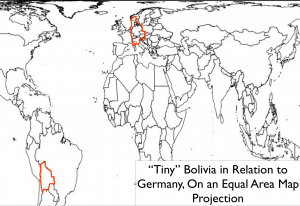 One of my pet peeves is the journalistic use of the term “tiny” to refer to sizable but generally ignored countries. In my book, to be considered “tiny” a country must be small indeed, something on the order of Malta (316 sq. km or 122 square miles) or perhaps Luxembourg (2,586.4 sq. km or 999 square miles). (For countries smaller still, such as Liechtenstein [160 sq. km, or 62 square miles] or especially Monaco [2.02 sq. km or 0.78 square miles], I would be inclined to use a different term, such as “exiguous.”). Many journalists, however, use the term “tiny” for vastly larger states. On February 16, 2014, I came across the most extreme form of such adjectival stretching that I have ever encountered in a New York Times article entitled, “Turnabout in Bolivia as Economy Rises From Instability.” The offending passage runs as follows:

Tucked away in the shadow of its more populous and more prosperous neighbors, tiny, impoverished Bolivia, once a perennial economic basket case, has suddenly become a different kind of exception — this time in a good way.

Tiny Bolivia? Bolivia, with its 1,098,581 sq. km (424,165 square miles), easily makes the list of the world’s 30 largest countries, with an area roughly three times that of Germany and four times that of the United Kingdom. By any reasonable criteria, Bolivia is a large country.

It might be objected that the New York Times was referring to the population of Bolivia, not its area. But when such size terms as “tiny” are used for geopolitical units, the reference is generally assumed to be area and not population: would anyone, for example, call Alaska a “tiny state” owing to the fact that it has the fourth smallest population (731,000) in the United States, which is roughly one fifteenth that of Bolivia? I very much doubt it. But more to the point, Bolivia’s population, some 10 million strong, can hardly be considered “tiny,” as it outranks those of more than half of the world’s sovereign states. Nor is the population of Bolivia particularly small in contrast to those of its neighbors, excepting Brazil. Chile (16.6 million) is in the same general league, as is smaller Paraguay (6.8 million). In economic terms, moreover, Bolivia and Paraguay also fall into the same general category, with per capita GDP (PPP) figures of $5,000 and $6,100 respectively. (One can also object to the assertion that Bolivia was until recently “a perennial economic basket case,” but that brings up a different issue altogether.)

I suspect that the term “tiny” in this circumstance means something unrelated to size. It refers rather to perceptions of importance. It sometimes seems that in the minds of the journalistic elite, countries with relatively small economies such Bolivia are considered insignificant and hence ignorable so long as they pose no direct threats to the world’s “non-tiny” economic powers. What is more disturbing is the fact that even major events in vastly more economically important countries are often by-passed or downplayed by the mainstream media, as highlighted by an incisive recent post in Caracas Chronicles. As the author concludes,

The level of disengagement on display is deeply shocking. Venezuela’s domestic media blackout is joined by a parallel international blackout, one born not of censorship but of disinterest and inertia. It’s hard to express the sense of helplessness you get looking through these pages and finding nothing. Venezuela burns; nobody cares.

Today’s New York Times does cover the unrest in Venezuela, but it relegates the story to the fourth page.