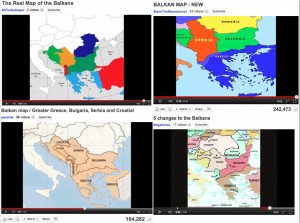 YouTube videos of “greater countries,” which imagine the glorious expansion of existing states, have a distinct geographical distribution. The vast majority of these hyper-nationalistic fantasies come from the region stretching from Pakistan to Hungary. Although a number of “greater” countries outside of this area have been proposed, few are supported at the popular level by YouTube productions. Greater Morocco, for example, is a historically potent and often-mapped idea, but a video search on the subject yields nothing but “greater flamingos” inhabiting certain Moroccan lagoons. The geographical clumping of this YouTube genre no doubt stems in part from the contagion effect; imaginary maps showing the expansion of one country provoke nationalists in neighboring countries to respond in kind. 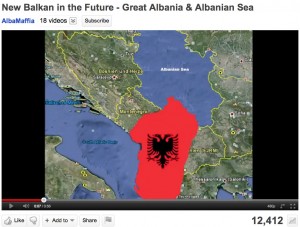 The Balkans and environs form the focal area of the genre. A YouTube search for “future Balkans” returns an especially rich trove of grandiose maps. Quite a few depict multiple “greater” countries. The images at the top of the post, for example, envisage the simultaneous expansion of Serbia, Bulgaria, and Greece. Maps of this type have a distinctly Christian bias, if not a more narrowly Eastern Orthodox one, as they prophesy the diminution or disappearance of such largely Muslim states as Turkey, Albania, and Kosovo. Macedonia, a country of mostly Orthodox Christian heritage, is usually erased as well. Bulgarian nationalists often insist that Macedonians are actually western Bulgarians, while Greek and Serbian nationalists commonly claim all or part of Macedonia on historical grounds. Western Macedonia, a mostly Albanian-speaking region, is also demanded by partisans of Greater Albania. The most imaginative map of this set takes the further step of inundating Serbia, turning it into the “Albanian Sea.” 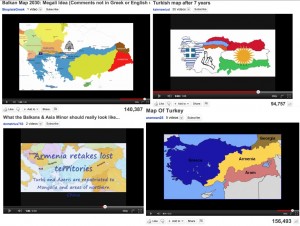 Depictions of Greater Greece, sometimes expressed under the rubric of the “Megali Idea,” tend to focus mostly on territorial gains in Anatolia. In a number of depictions, Turkey disappears altogether, divided between Greece, Armenia, and other states, real or imagined. One video explicitly calls for the “repatriation of Turks and Azeris to Mongolia and areas of northern China.” Not surprisingly, YouTube maps made by champions of Greater Turkey respond in kind. Several visualize Turkey, Albania, and Macedonia expanding together at the expense of Greece. Although all such visions of the future might seem comically absurd, many have been watched tens or even hundreds of thousands of viewers.

It is not surprising that YouTube dreams of national aggrandizement would center on the greater Balkan region. The Balkans have seen several major geopolitical rearrangements over the past century, beginning with the two Balkan wars (1912-1913) and continuing through the emergence of two of the world’s newest countries, Montenegro (2006) and Kosovo (2008). Complex ethnic mixtures have also long characterized the region, although they have been much reduced by the legacies of war and nation-building. If mega-nationalistic videos are any indication, the geopolitical framework of the Balkans remains unsettled in the popular imagination. 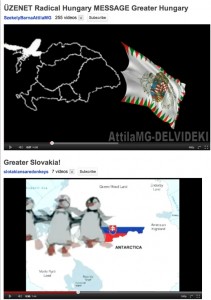 To the north of the Balkans, Greater Hungary also has a significant YouTube presence. Hard-line Hungarian nationalists, who make up a significant political block in the country, demand the return of all territories stripped away in the Treaty of Trianon of 1920. A particularly dramatic clip shows an eagle reattaching the lost lands to the current rump Hungarian state. Neighboring Slovakia, scheduled for annexation by the devotees of Greater Hungary, has no genuine YouTube presence. One Hungarian chauvinist, however, has posted a mocking video of Greater Slovakia, placing a truncated map of the country on the South Pole, accompanied by frenetically dancing penguins. The first comment below the video, in Hungarian, states that it would have been better to have placed Slovakia on another planet. Hyper-nationalist rhetoric evidently remains virulent in some quarters of central European society.