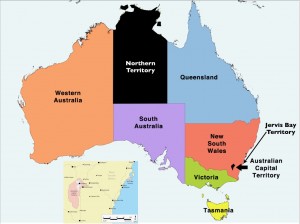 I had always thought that Australia proper* contained six states (Queensland, New South Wales, Victoria, South Australia, Western Australia, and Tasmania) and two territories (the Northern Territory and the Australian Capital Territory [ACT] around Canberra). In actuality, it contains three territories. Missing from the standard list is the Jervis Bay Territory, a small coastal peninsula (67 km2 [26 sq mi]) located 150 km (93 mi) south of Sydney. Jervis Bay was separated from New South Wales in 1915 to provide the new capital of Canberra with ocean access. Jervis Bay is thus often regarded as an exclave of the ACT, but it is actually a separate territory in its own right. Not quite 400 people live in Jervis Bay, most of them on the local Royal Australian Navy Base. Most of the territory is now legally recognized as Aboriginal land.

Jervis Bay is perhaps best known as the site of the South Coast Pipe, one of Australia’s most famous surfing spots. As described by Surfing Australia, it features a  “hollow, intense left tube, offering a shorter, punchy right. … Pipe will hold 10, even 12 ft. tubes, if conditions are perfect.”

Jervis Bay has been in the news recently as a test site for director’s James Cameron’s deep-sea submersible. Cameron hopes “to become the first human to visit the Mariana Trench’s Challenger Deep, which plummets 6.8 miles (11 kilometers) down in the Pacific Ocean, for more than 50 years, and bring back data and specimens.”

*Excluding the country’s minor outlying islands, that is.