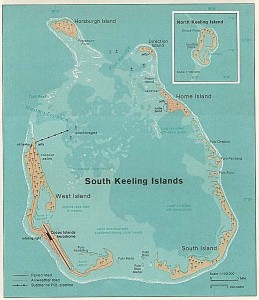 Australia recently announced that it might allow the United States to establish an airbase on its remote Indian-Ocean Territory of Cocos (Keeling) Islands. Such a base would be used primarily for a fleet of surveillance drones, but it has been suggested that it could potentially serve as a partial replacement for the massive U.S. military complex on the island of Diego Garcia in the Chagos Archipelago, which is leased from the United Kingdom. Australia and the United States have recently heightened their military cooperation. The U.S. is establishing a contingent of Marines in the northern Australian city of Darwin, and negotiations are underway to station U.S. aircraft carriers and nuclear submarines in the Western Australian capital of Perth. Most observers link the enhancement of military ties between Australia and the U.S. to the rapid growth of the Chinese military.

The plans for the drone base have generated opposition in Australia. Shortly after the announcement was made, Australian Defense Minister Stephen Smith insisted that the proposal was merely a ”long-term prospect.” Australian opposition leaders, however, stated that they have a ”very positive” attitude about the proposed base. Australian military experts caution that major investments would be necessary before the Cocos Islands could be transformed into a drone base: “The harbour is really a lagoon while the island lacks significant infrastructure such as a shopping centre and the limited supply of freshwater significantly affects the numbers of people the islands can sustain.”

The Indonesian government has formally objected to the proposal, stating that it “threatens Indonesian sovereignty and security.”