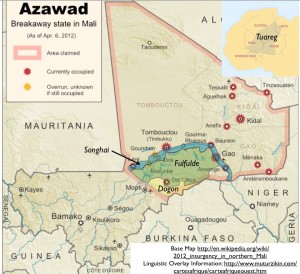 On April 6, 2012, the Tuareg rebels declared the independence of the territory under their control in northern Mali, deeming the country “Azawad.” Within hours, the Wikipedia had posted an article on The Independent State of Azawad, which it describes as “an unrecognised state that was unilaterally declared in 2012 after a conflict in which the National Movement for the Liberation of Azawad (MNLA) and other groups drove the Malian Army out of the territory claimed by Tuareg-led separatists.” Maps of Azawad immediately began to appear in numerous internet sites. On April 7, the New York Times ran an informative article by Lydia Polgreen on the break-way state, noting parallels with other unrecognized states and separatist movements in Africa. Without a doubt, Tuareg Rebellion and its self-declared state of Azawad have gained the attention of the global media.

Unmentioned in most reports, however, is the fact that the relatively densely inhabited southern part of “Azawad” is occupied largely by non-Tuareg peoples, which complicates the political situation considerably. As in-depth reporting, such as that of National Public Radio’s Ofeibea Quist-Arcton, shows, the Songhai, Fulfulde, and other indigenous residents of the middle Niger region are not happy with the self-declared country. As she reports:

[W] e think of the north and the Sahara Desert as being Tuareg country, but there are many, many other tribes who live there, the biggest being the Songhai, but there are also the Bella who used to be the slaves of the Tuaregs, and other smaller ethnic groups also live in the north. They held a meeting, those living in Bamako, the capital, yesterday to say, no. We are – we don’t want independence. We are part of Mali. We want to remain part of Mali.

To illustrate the situation on the ground, I have taken a Wikipedia map of Azawad and added the main non-Tuareg linguistic groups, based on the language maps found in Muturzikin.com. Muturzikin also shows northwestern Mali as Arabic- rather than Tuareg-speaking (Tamasheq), but sources vary considerably on this score. Also of note is the fact that most of the Tuareg-speaking region lies outside of the boundaries of Azawad, as can be seen on the inset map. Finally, it is also significant that the declared capital of Azawad is the city of Gao, which was historically the capital of the Songhai Empire.