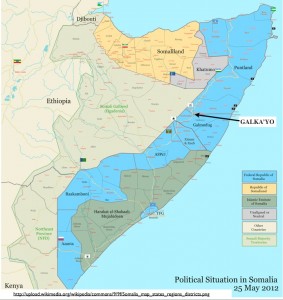 The most recent version of the ever-changing and always excellent Wikipedia map of the political situation in Somalia shows the internationally recognized Federal Republic of Somalia controlling roughly half of the country, with most of the rest falling either under the power of the Islamic Emirate of Somalia, closely aligned with the Al-Shabaab radical Islamist Group, or that of  the self-declared independent state of Somaliland. What the map fails to adequately convey is the fact that several of the regions that acknowledge the Federal Republic are actually fully autonomous political entities. Polities such as Puntland support eventual Somali reunification, but tense relations between the country’s different autonomous regions make such a scenario unlikely, at least in the short run. Puntland and neighboring Galmudug, for example, have tussled over a number of issues, although the two governments did agree in 2011 to “cooperate on security, economic and social matters.” Yet in July of this year, the airport in the important city of Galka’yo came under mortar shelling, which the Puntland-based management blamed on “a local armed militia from Galmudug state.”

The situation in Galka’yo, a regional metropolis of more than half a million people, is complicated by the fact that city is divided between Puntland, which controls the urban core to the north of the airport, and Galmudug, which controls the suburbs to the south. Overall, the city has prospered since the fall of the Mogadishu warlords to the now-defunct Islamic Courts Union in 2006; money and resources that previously flowed to the Somali capital of Mogadishu now remain in the region. According to a 2011 article in Africa Review:

Hotels, guest houses, supermarkets, restaurants, and new office blocks for NGOs and the government compete in height with the newly-erected, tall minarets of the mosques. The city [of Galka’yo] also boasts of social services like hospitals, schools, police stations and petrol stations. Even the former Somali army barracks in the city has been renovated and is kept in good condition.

Tensions between Puntland and Galmudug, however, are not the only threats to Galka’yo’s stability. The Puntland government had been widely been seen as acting in concert with pirate captains; a January 2012 BBC report claimed that the Puntland economy overall had reaped substantial benefits from piracy. More recently, however, Puntland has apparently been taking on the pirates of its coastal strip, and at some cost. The reach of the pirates evidently extends well inland. On August 13, Garowe Online reported that:

Puntland forces repelled an attack by armed pirates on the Galkayo central jail station early Sunday afternoon. Pirates equipped with automatic guns attacked the Galkayo central station in a bid to forcefully free fellow pirates who were apprehended in a raid by Puntland security forces that netted over 40 people related to insecurity in the region. 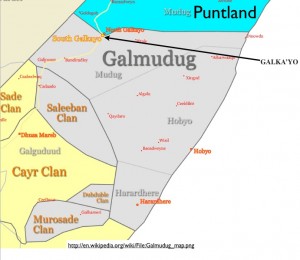 More recently, Puntland security forces have also taken on Al-Shabaab insurgents who seek to destabilize the region and impose their own exceptionally harsh version of Islamic law. On August 23, Shabelle News reported that the Puntland military had “detained dozens of armed men carrying explosives, whom the officials are accusing to have links with Al Shabaab militants and are now being held at a prison northern Galka’yo.”