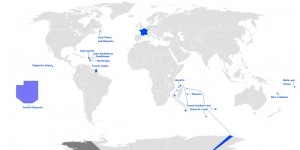 French news outlets are reporting “spontaneous and unorganized” outbursts of violence on the island of Réunion, one of France’s overseas departments.  Protests against the high cost of living and rising prices of fuel exploded several days ago.  In the administrative capital, Saint-Denis, the quarter of Le Chaudron is littered with stone and broken glass after violent clashes Wednesday night.  Protestors also burned cars in Saint-Denis and Le Port, both located in the northern parts of the island.  Saint-Benoît, a commune in the east, also experienced disorder.

The Mayor of Saint-Denis, Gilbert Annette, made an appeal for peace Thursday morning on public radio.  He emphasized the necessity of finding a solution to Réunion’s high youth unemployment and lack of purchasing power among low-income inhabitants.  He urged the state to “take exceptional measures for Réunion.”

Le Chaudron, one of the most heavily populated districts on the island, is known for violent protests.  In 1973, demonstrations led to clashes with France’s riot control police, the Comapgnies Républicaines de Sécurité (CRS).  The 1991 “Événements du Chaudron” were a series of riots marked by skirmishes between young protestors and the police, the use of Molotov cocktails, and the torching of cars and stores.  This latest outburst of socioeconomic tension continues.

Similar conflicts have occurred in other French overseas departments in recent years, including Mayotte and Martinique.