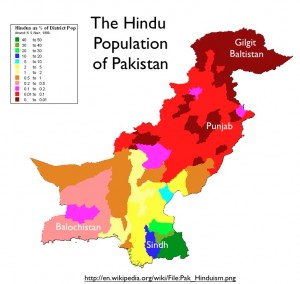 Indian newspapers have recently been reporting that the large numbers of Hindus are fleeing Pakistan and seeking refuge in India. Such reports focus on southern Pakistan, especially Balochistan and Sindh, where most Pakistani Hindus reside. According to one article, “reports speak of abduction for ransom [of] traders and business-people [and of] professionals like teachers and doctors being harassed and in some cases dragged from their homes or places of work and killed in broad daylight.” Abductions and forced conversions of young Hindu women to Islam are frequently mentioned as well.

Pakistan’s Hindu community is often overlooked yet is far from insignificant, numbering between 2.5 and 4.5 million. Before the 1947 political division of the Indian subcontinent, Hindus were far more numerous than they are today in the territory that became Pakistan. In the bloody partition process, almost all Hindus were expelled from Pakistan’s portion of the Punjab, just as almost all Muslims were expelled from India’s portion of the Punjab. Hindus also fled Karachi en masse at the time. But in rural Sindh, and especially in districts near the Indian border, most Hindus remained.

Very few Hindus live in the northern Pakistani region of Gilgit-Baltistan, an area that has long been almost entirely Muslim, with noted concentrations of Ismaili Shiites. Until recently, Gilgit-Baltistan was a peaceful place, but that is no longer true, as Sunni extremists have been attacking Shiites. As a result, Pakistani authorities fear that the area could experience massive sectarian violence. Some Indian nationalists are angry that this issue is not receiving more attention in their country, as India retains territorial claims over all of Gilgit-Baltistan, which was once part of Kashmir. As one recent article frames the issue:

Ironically, this report, involving the lives of people from Gilgit-Baltistan, which India claims to be an integral part of its sovereign territory and is now currently under the occupation of Pakistan, was published on the ‘international’ page of one of India’s leading national newspapers. Of course, many others did not bother to publish the news at all.

Meanwhile, efforts to reduce tensions between Indian and Pakistan are proceeding on several fronts. One intriguing avenue for hostility reduction is popular culture, focusing on food and television. As NPR recent reported:

The Indian cooking show Foodistan, on NDTV, has all of these tricks plus another spicy device: nationalistic pride. The show pits Indian chefs against Pakistani chefs in a mad race to prepare three dishes in 90 minutes. And in doing so, it exploits the long rivalry between the two countries — something that has rarely been a joking matter ….

While there’s still a long way to go for the kitchen stadium to replace the cricket stadium as the main battleground for the Indo-Pakistani rivalry, both seem better than the alternative.